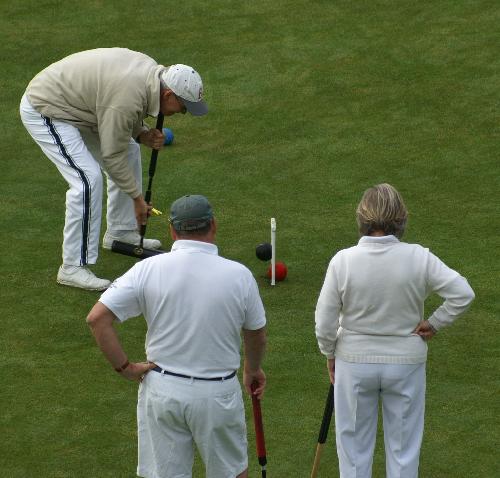 Note the signs of a good tournament: the return of the defending champions (David Barrett and Barbara Young), an increase in the playing strength (Paul and Dick Strover, Mike Percival and Mike O'Brian playing for the first time) and almost faultless October weather. Thus, the Yorkshire Open Doubles had a sound footing. Manager Freda Vitty had also prepared an excellent playing order. A couple of late withdrawals threatened to scupper the proceedings but faithful members of the Ripon club stepped in at short notice to keep the numbers right: fourteen pairs.

Freda had seeded the pairs and this led to suitably competitive block play, although the top two seeds in each block played in the third round of the Saturday morning. In Block A, Tim King and Roy Ware met stiff resistance from Mike Percival and Paul Strover. The latter prevailed 7-5 and went on to win all of their games (one on time). Ware & King made no further mistakes and, despite playing together for the first time in competition, Mick Haytack and Mike O'Brian beat all apart from the top two pairs. The fourth qualifiers from the block were the local players Fergus Thompson and Alan Wood.

In Block B, Sam Curry and Freda Vitty beat the defending champions in the expected top-of-the-table clash and they then went on to have the impressive record of conceding little more than two points per game on average in achieving six straight wins. The rest of the block was extremely tight and in the end four pairs had three wins each. Dick and Adrienne Strover were the unlucky pair to fall just short after the necessary calculations. This was a great shame as Adrienne played with great composure in her first major competition. Second place went to Peter and Carol MacGregor, who played with their usual and admirable high tempo and, after a disappointing morning, came back very strongly, including a magnificent 7-2 win over Young & Barrett (3rd). Derek and Eileen Buxton put their experience to good use and completed the list of qualifiers.

One of the rewards for qualifying was to lose the shackles of the 45-minute time limits (although only two games, including one draw, went to time). In the quarter-finals (first games on Sunday morning), the format was "two ahead" (first to 7 points unless the score reaches 6-6, when a two-point gap is needed, using the 19-point game course, with hoop 19 as the decider if necessary). Revenge never seems the right word on the croquet court but, after narrowly missing out to them last year, King & Ware beat Barrett & Young, who never really found their best form. Strover & Percival saw off the Buxtons and O'Brian & Haytack defeated the MacGregors. The match of the round was Vitty & Curry against Ward & Thompson; Sam (hotel manager) against both her head chef and her fiance, respectively. They all played with great expedition and made swift work of a 7-5 victory to the ladies.

The semi-finals were full 19-point games. Haytack & O'Brian showed their growing confidence, took an early lead against Percival & Strover and went on to hold victory with few alarms. The other semi-final was far tighter. Curry & Vitty held an early advantage but Ware & King gained hoop 7 to take the 4-3 lead that is often the basis for victory. However, Vitty & Curry kept pace and when Ware missed an advantage-gaining shot at hoop 11, Curry & Vitty were able to take a 6-5 lead. The next turn of events was then decisive. King & Ware came back well from the disappointment and took an 8-6 lead by winning the next three hoops. All that remained was for King to run a long angled hoop 16 to prevent Vitty & Curry drawing level again and victory soon followed.

Thus, the Ashby fans were cheering at the presence of three club members in the final (Ware being the odd one out). For the first time in the weekend, the weather turned less than ideal but the rain never became more than a fine mist in the air. O'Brian & Haytack continued their semi-final form with a 7-5 win but in what was the first game in a best-of-three game final. Ware & King were now in a relaxed mood and although their best play was only slowly emerging, they did not panic. Without too many difficulties, they won the second 7-5. The see-saw was going and the critical way point emerged at 2-2 in the third game.

By the time that O'Brian (yellow) was facing a relatively simple attempt to run the hoop, the players had already competitively contested hoop 5 with some decent shots. Haytack & O'Brian took a look at the shot a couple of yards beyond hoop 6 that King had with black at yellow and decided that this was not a danger. However, judging the narrowest of gaps to perfection, King shaved hoop 6 to the left and the peg to the right and cleared yellow to the boundary! Everyone was scattered and the fun could begin again. Enough to break the hearts of lesser mortals but not Haytack & O'Brian and this led to a series of shots that would have graced even the great Yorkshire Open Singles finals between the Egyptian World Champions Khalid Younis and Salah Hassan. A string of several 10 to 15-yard clearances kept the hoop alive for both sides; croquet of the highest quality. Unfortunately, the pressure told before any one individual could find the exquisite hoop shot to crown such a fine battle. King & Ware prevailed and although O'Brian & Haytack did not let their heads drop, they were not able to find a way back into the game. Ware & King had finally been provoked into their best form and they gave no mistakes away. The result was a 7-4 scoreline. Haytack & O'Brian had fought valiantly in their first national final and will be much the better for the experience. One pattern in the match was the lack of opportunity for O'Brian to show off his jump shot aptitude. King & Ware were well aware of the danger of allowing Mike such opportunities and, after very poor performances in the Open and National Doubles Championships, were back to winning ways.

All had enjoyed a top-quality tournament. Curry & Vitty won their play-off to come third. And in the all-play-all block for the losing quarter-finalists, Wood & Thompson played well and clinched fifth place overall. With the winners getting decent prize money and the off-court atmosphere so relaxed, surely the number of top players will again increase next year.