The Inter-County Championships - A Firm Basis for Determining Player Eligibility 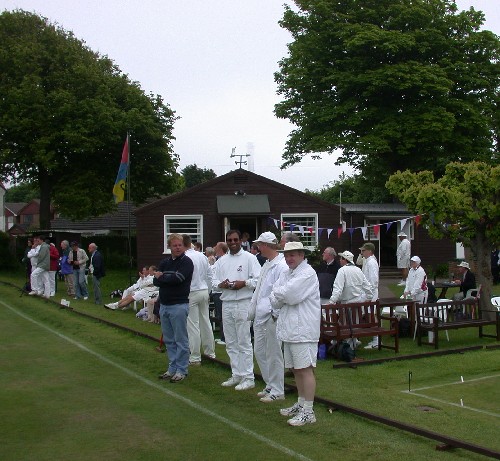 Looking back in the record books, one finds that there has been a 'Counties' competition in croquet for over 110 years. It started to build up before WW2 but went back to a very small competition after that war. It has since gradually grown until the present day when we have a situation where, even using two venues, it is very difficult to accommodate more than 22 teams even though more than 22 counties are showing interest.

Until the late 90s 'Counties' always meant the croquet jamboree that was staged at Southwick and Compton at the end of May, and of course was Association Croquet doubles. However a 'new kid on the block' came along in the late 90s in the shape of the Golf Croquet Inter-County Championship. The initial staging of this event was again a very small affair played out on the slopes of Northampton CC. It is very pleasing to note that having copied the formula from Association Croquet, this event also seems to be taking off in popularity, with thirteen counties currently vying for the twelve places available.

So exactly what makes both these competitions so popular with our players? Certainly there is nothing special about the eligibility criteria for playing in the event. Being born in the county, living in the county or belonging to a club in the county can hardly be regarded as anything special or unique. It is simply a formula that works and brings together at one venue a very large number of the best croquet players in the country; over 150 players participate in the Association Croquet event, and around 60 in the Golf Croquet. Both events have almost taken on the character of an annual croquet players' reunion with a good slice of play added. This certainly makes both events the biggest in their particular discipline, and in the case of Association Croquet probably the biggest regular croquet event in the world.

Some years ago the Tournament Committee decided the best way forward for the AC Counties was to operate as two divisions. At the time there was much muttering that this would be the end of Counties as we knew it. Luckily it produced just the opposite effect. Because of the promotion and relegation possibilities, most teams had much more to play for throughout the whole of the event and competition quite often remains extremely fierce right to the end. Golf Croquet has not followed on identically but has chosen a mixture of singles and doubles for its format and this appears to be extremely popular.

Whilst there is nothing special about the eligibility criteria, once the formula is set it generates quite a fierce rivalry, and teams try every trick in the book to prove that the better players are eligible for their team. Some years ago we had to restrict the club criteria to full members only after it was discovered that far country membership was being used to bend the regulations. The whole basis of our eligibility rules is of course the county, but virtually every government in the past 50 years has contrived to muddy this definition by changing county boundaries, eliminating some counties and creating new ones, and then reversing some of the changes. Hitherto the Tournament Committee has tried to fix the goal posts by defining the counties as those that existed before the 1972 act. Whilst this gave some justification for retaining teams such as Middlesex the rules too had to be bent to allow an Avon team to continue to play. When an application was received from Somerset, a county that includes a large part of the territory comprising the former county of Avon, the Tournament Committee decided that it was time to seek a definition of county status which would so far as possible avoid future disputes.

A search on the Internet brought to light the existence of The Association of British Counties (ABC), a society dedicated to promoting awareness of the continuing importance of the 86 historic (or traditional) Counties of Great Britain, and encouraging their use as a basis for social, sporting and cultural activities. The most significant feature of this Association is that it produces a gazetteer of the whole country which lists over 50,000 place names in England with their traditional county; importantly, whilst new place names may be added, existing entries are not subject to change, One can obtain a copy of the gazetteer for archive purposes at a nominal cost, and it is available on line at www.abcounties.co.uk/

On this basis the AC Tournament Committee felt that adoption of the ABC definition of counties was ideal for our purposes, and would be effective immediately. The only exception would be the inclusion of the Channel Islands as a county in its own right. To regularise the present situation the committee also decided that the anomaly of Avon could continue no longer: the present Avon team would be redesignated Somerset, and players who have played for Avon are deemed to have played for Somerset. It is hoped that this change of counties definition will not cause any major problems, but should any arise the Tournament Committee will look at each case individually and try to deal with it sympathetically.

The Golf Croquet Tournament Committee already use the counties definition as given for the AC Inter Counties and will of course fall in line with this change. It should be noted that for purposes of determining eligibility the two competitions are considered as separate events; playing for a particular county in one event will have no bearing on a player's eligibility to play for a different county in the other.