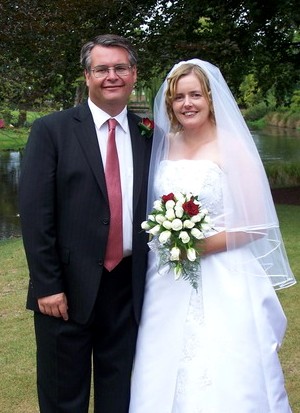 Wednesday January 30 saw the outdoor wedding of Jenny Williams and Chris Clarke on the banks of the river Avon, Mona Vale, Christchurch, which not only was a beautiful occasion, but also now holds the record of the highest ranked wedding (grade 2597) and a congregation not far behind (especially if one includes the celebrant Charles Jones).

Despite the best efforts of Mother Nature (and the bride's decision to arrive by punt), the wedding went off without any hitches (other than the couple's) and I'm sure all readers will wish Mr and Mrs Clarke all the best for the future.

Chris and Jenny took advantage of the World Championship being in New Zealand so that many of their croquet friends would find it easier to attend their wedding.