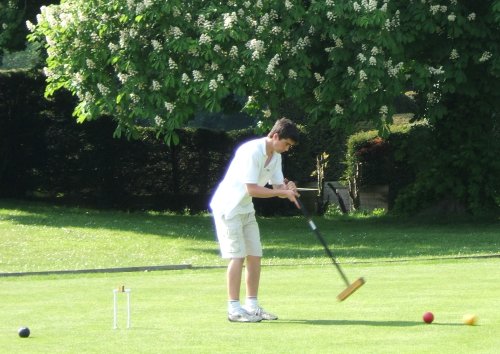 William Gee rushing to corner 4 after laying a cross-wire at hoop 2 of lawn one at Nottingham (Photo: Ian Vincent)

William Gee, playing off scratch, was undefeated in the two day Spring Handicap Weekend at Nottingham, after a narrow win against Richard Huxley in the final. He thus becomes holder of the Hopewell Salver, a magnificent rectangular silver tray presented by the Manager (and Cook!) in 2004, to mark the club's 75th season. The event was played in warm sunshine, with the chestnut tree in full flower and the rhododendrons coming into bloom.