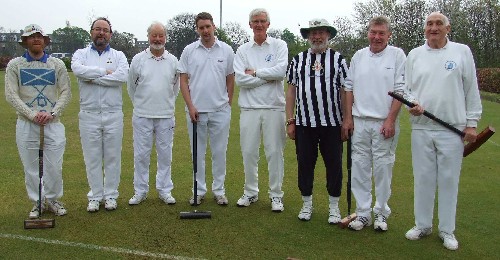 This year it was the turn of Croquet North to host a visiting SCA team from North of the Border for a two day match for the Scottish & Newcastle (beer pump) Trophy. The (advanced rules) format chosen was as last year in Edinburgh: everyone played in three doubles matches, each partnering every other team member and a variety of singles matches to achieve a result. Time limits were 2.75 hours. Bruce Rannie, Derek & Sheila Watts looked after all the arrangements most efficiently, so that the weekend was a friendly and sociable occasion as well as providing excellent croquet on Tyneside's lawns.

Croquet North won by 10 games to 4, so the trophy returns to the North.