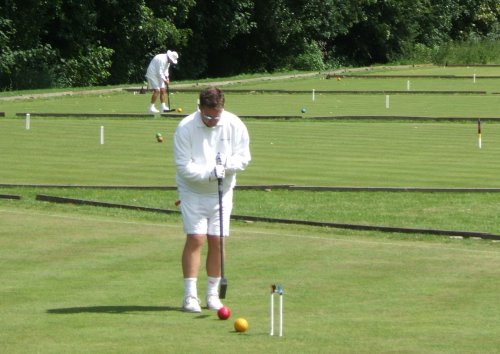 David Maugham on Lawn 1 before the deluge (Photo: Ian Vincent)

Sharp showers and flat tyres seemed to characterise the East Midlands Championship this year. A downpour on Thursday night tamed the lawns and another on Sunday afternoon nearly caused play to be abandoned. By then, however, David Maugham was safely in the pavilion, having dominated the event by winning both the draw and process to take the Hopewell Cup, all but one of the games with triples. Those caught out included the two loosing finalists and those in the final stages of the plate. Once the rain had cleared, Robin Brown beat Marcus Evans in the 2nd place play-off and Ben Rothman, one of three Americans warming up for the Solomon Trophy match, beat Jack Wicks to win the plate.

The flat tyres included one on Martin Leach's motorbike, fortunately before he set off from Ipswich and one on the American's hire car, just as they arrived. The state of the tyre on Rob Edlin-White's bike is unknown, as is that of the cat which caused him to come off it earlier in the week, reducing him to spectating with a broken wrist and collar bone.