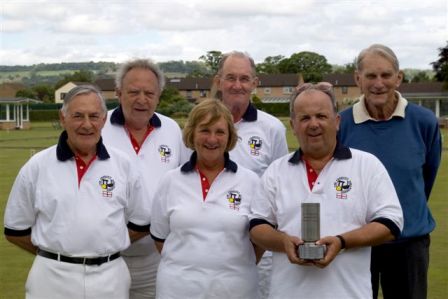 The CA team retained the Eatough/Darby trophy at Cheltenham during the weekend of the 28/29th June by 14 points to 6. The fixture included, for the first time, Association and Golf Croquet in the form of Advanced, Handicap Advanced and Golf Croquet. The combination seemed to work well and all enjoyed a full weekend of croquet as well as a most enjoyable social programme.... eating!

It appeared that the CA team might overpower their opponents and the second day started with the CA team needing only one point to retain the trophy and two points to secure the outright win. The Swiss team fought back on Sunday morning with three good wins before Dave Mundy sealed the rubber with a GC win, quickly followed by Association wins for Carol Smith and Skipper Klim Seabright. The full results can be seen on the CA Website.