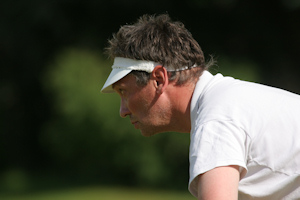 David Goacher in play during the final (Photo: Samir Patel)

James is through rover. If there were a crowd, they'd be on the pitch.
James leaves Black and Blue in elegantly phallic position by the peg, and pegs out.

James Death & Robert Fulford are Open Doubles Champions
Now I've got a train to catch. Thanks for your emails. That's all folks.

I'm reluctant to type these words, but surely it's a formality now. James is making penult.

Crowd has dwindled somewhat. As Statto says, One man and his dog. Except for the dog.
James has just made 2-back, has chance for rover peel before 3-back. Peel goes through.

James makes 4-back peel after 3. Rushes back to peelee after 4. Looks in reasonable control. David Goacher is sitting on his own on a bench by lawn 7, he must be distraught. He had a 4' straight hoop, and hit the outside of the wire. James now lining up penult peel after 6: peelee goes through to 3y S of rover.

Turn 7. James plays Yellow, hits Black, takes off to Blue and Red, good rush on Red to hoop 1, makes hoop 1 with more wire than intended. Now James has a standard TP to win the match.

David sends Red to hoop 3, getting rush on Blue to Yellow. Rush on Yellow to hoop 2 needs some cutting. Blue and Red waiting at 3 for a standard TP. Restalks rush, overcuts slightly, but still about 3y S of hoop 2. Underapproaches, slaps thigh. 4' hoop maybe. Doesn't like it, head shaking. (His head, not the mallet's). Fails hoop, bouncing off to side. Yellow 4 yards away.

Turn 6. Goacher has the chance to win the match.
He croquets Yellow to between hoops 3 & 4, rushes Blue to 3y SE of Red. Stops Blue to near peg. Rush is overhit by a couple of yards, but he makes hoop 1.

5. James lifts Yellow to end of A-baulk. Shoots at Black, misses, now in contact with Black.

Danny's made hoop 5, and has rushed to West boundary to pick up Red. David comes on to discuss leave.
If Death & Fulford miss their next shot, your correspondent may have to leave before the end - if I don't get the 8 o'clock train, I ain't getting home tonight.

So Rob has made 9, as the Americans would say.
Leave: Yellow on East boundary, 2y S of peg-high, with 1 yard rush on Black to Red, which is on West boundary 5y North of peg-high.
Turn 4. Danny shoots from 3rd corner, hits Yellow

Rob's reached 1-back.
There has been another presentation, James Death winning a glass for spending most at the bar during the week.

A yellow ball has appeared on the lawn, presumably from James. It's 2y NW of hoop 5.
2. David (Black) to West boundary 2 yards South of peg-high.
3. Rob (Red) shoots at Black from end of A-baulk. Hits. Rob is hitting pretty much everything.
Red has a 3-ball break.

OK that's the baubles handed out. Fulford won the Solomon trophy for best peeling performance (9 sextuples in the singles).

Game 3 will have to wait a little while, as we have the presentation of everything bar the Doubles.

David takes on the 14-footer. Hits it half-ball. He was only playing to the crowd. Now has trivial finish.

Turn 19: Maybe it's nearer 5 yards. David is in a quandary. He's now looking at ignoring Yellow and doing the big roll from near 4: blue to penult, Black to Red (which is 1y NW of 4-back).
There are apocryphal stories about early chess software, which faced with 2 ways of forcing mate in 3, would run out of time deciding which was better. David is in such a state.

Turn 18: James shoots Yellow at Blue (22y), missing. Black hasn't got a rush on Blue, so is looking at picking off Yellow from 4 yards.

Turn 17: Danny & David still contemplating cross-wire. Black is 2y S of hoop 4, so care has to be taken to avoid wiring lift. Yellow has been POPped to 4, by the way. Finally they get the cross-wire, joining up S of hoop 4.

James fails hoop 3. Approach bananaed, James says. It's off Blue, not Black, so it's leave time. David & Danny are discussing a cross-wire at 4-back.

Turn 16: James lifts Yellow, shoots at Black from end of B-baulk, hits! Rushes Blue to Red, Red to hoop 1, makes it (finally). James waves hand in air with relief. He has all the balls for a standard TP.

Danny's gone round to the peg. He's constructing a reverse spread:
Yellow (for 1) at peg
Red (for 4-back) about 8y NNE of hoop 4 (wired from yellow)
Black (for 4-back) 9y South of 2nd corner, with 1y rush on Blue (for peg) pointing just N of rover.

Danny croquets Yellow toward 2-back, hits Black out of the hoop, tries for rush on Red. Needs cutting, ends up 3y E of 1-back. Approach is OK, makes hoop, he's away.

Rob makes 3 hoops. He seems to be taking my approach to leave-making: muster all balls round 3-back, then cobble something together. I'm sure Rob knows what he's doing. Seems to be a sort of NSL. Blue has been croqueted near West boundary, a few yards North of peg-high. Black is currently in hoop 4, it's now croqueted just N of hoop (1/4" N of jaws, one of my runners tells me). It will rush to hoop 1. Yellow is 12y N of 4th corner, with a rush on Red cuttable to hoop 1.

Danny ran hoop 6 without control, misses 4-yard return roquet to just North of corner 4.
Red has a 6-yarder, Yellow a 7-yarder.
14. Rob decides to have a turn. Red hits Black (6y). Yellow is at 1-back should he wish to make it. Black's gone to 2-back, so I guess he does.

Looks like Danny's thinking of a delayed TP, but is not yet in full control. Sensibly decides to make hoop 6 off partner ball, with idea of rushing back to peeling position after the hoop.

Sorry got my turns confused there. We are now on Turn 13:
13. Danny (Blue) runs first hoop, hits Red, picks up break.

Turn 11. Blue ends up approaching hoop 1 from 6y NW of hoop. Fails hoop.
Red is 6y away from Blue near hoop 5. Yellow is at hoop 2, Black off North boundary behind 2.
Turn 12. After some discussion as to who should play, James shoots Yellow at Black. Misses 7-yarder.

Leave: Yellow (for 1) 2y WSW hoop 1; Red (for 1-back) 4y WSW of hoop 2; Blue (for 1) with a rush on Black (for 4-back) to Red from West boundary. Blue / Black pretty much wired from Yellow by hoop 5.
Turn 10. James shoots Yellow at Red (22 yards). Ooohs from crowd suggest it was close, but not close enough. If James does get in again, I can assure you that he has considered the option of the TPO.

Turn 8. James lifts Yellow to end of A-baulk. Has to wait for wandering spectators. Then has a re-stalk. Now he shoots, hits Blue, unluckily rushing it some yards North. Apparently Goacher should have been thinking of POPs last turn (he could have POPped 1 at 1). Now James has another chance for glory.
Rolls up to 1 from 5y West, fails angled hoop off Black. (Didn't want to use Red because he wanted 1-back peel at hoop 2.)
Turn 9: Black hits Yellow.

Danny is out on the lawn, David being somewhat hampered at the peg. The cross-peg is OK: Red at the peg, Yellow near West boundary. Blue has a rush on Black from 12y North of 4th corner.

David recovered control of the break, and is now making 3-back off Yellow with a view to a spread.

David is hampered after hoop 4 and has to take the 8-yarder at his hoop 5 pioneer, Hits it.

James has 5-yard roll approach to hoop 1. Gets 5' hoop, sticks in jaws off Black.
7. David hits ball in hoop gently from 3 yards. I might be able to keep up with this turn.

Rob has 1-back leave. He didn't get a rush out of hoop 6, so the cross-wire is pretty much North-South. So as well as the thirty-something yarder, Black might fancy a 5-yard hoop.

The Irish straight rover peel has gone well. Here comes the rush to the peg. Two yard peg-out. All done and dusted in about 15 minutes.

I'm not a typist, but this is the first time today I've been struggling to keep up with play. James does not hang about. He's just attempted the rover peel after 3-back, but it bounced off.

Red was rush-peeled before hoop 5. James is now trying the penult peel going to a rather wayward 1-back pioneer (3y or 4y West of hoop). I guess the peel went through. His 3-back pioneer has bounced off the peg, so partner ball is going to 3-back.

James jawses 4-back peel after 3.

5. James picks up break, has position for standard triple.

Rob's gone round to 4-back and is thinking about the leave.
By the way, we're in the middle of a sunny interval. The Doubles Final is on lawn 8. On lawn 1 Pete Trimmer and David Harrison-Wood are contesting the Z final.

Patmore finishes a delayed TP to win the Association Plate. The match was a repeat of the recent World Championship Plate Final, which was won by Death. They're planning a unification bout later in the year. Patmore beat Death +26TP -26SXP +19TP.
The Y Doubles was won by Tudor & Wicks with a Wixy TP.
The Doubles final should be on in about 5 minutes.

The Open Doubles Final will be starting shortly, on the completion of the Plate Final.
In the Plate Final, Patmore is 1 & 4-back v Death on 1 & 1-back. Death has just missed the lift.