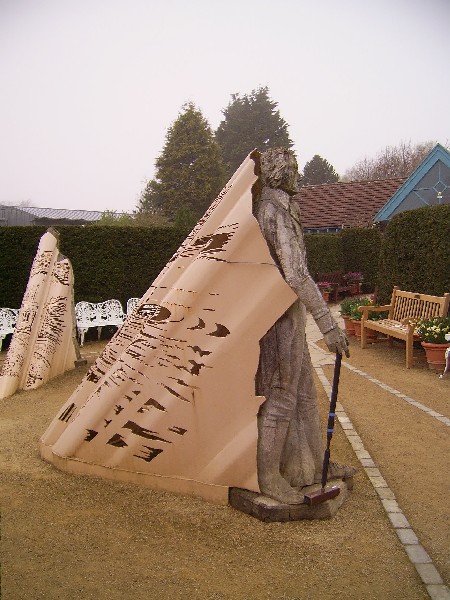 An invitation to put on a croquet demonstration at Durham University Botanic Gardens was taken up enthusiastically by members of Auckland Croquet Club in the hopes of increasing their own membership, but mainly to help out the newly formed Durham CC. John cotes and a few other members of Auckland, who live in Durham City, have worked hard to set up this club. On land owned by the Police Authority, they have the use of 3 ex-bowling greens in a beautiful and accessible setting. Unfortunately, after a low cost introductory year, the landowners are asking an annual rental which would only be viable if there was a much increased membership.

The 15th of April at the Botanic Gardens started in thick fog, which lifted by noon but the day remained grey and cold. Visitors were mainly families with young children concentrating on an Easter chick hunt and a group of retired civil engineers. I had great hopes of the latter group, as the game seems to have a special appeal to this profession. There were a few expressions of interest but most were from tourists not local people; however a contact in the coffee shop brought an introduction to a croquet enthusiast who heads up the University Education Department. Hopefully, this could be a source of new members for Durham CC. I understand that Durham University was where Robert Fulford honed his croquet skills! We can but hope that we sowed some seeds while at the gardens.

The picture shows "Bonny Bobby" Shafto, born 1732, a member of a Durham colliery owner family, who became an MP in 1760, trying a mallet for size at the Durham Botanic Gardens.