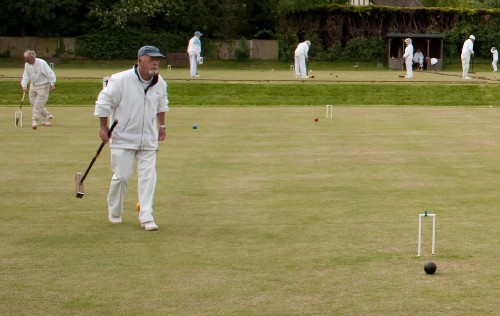 With only 13 entrants, it looked as though the 4 lawns at Colchester were going to be sparsely populated during the weekend. Fortunately, a number of local members were happy to come along for periods ranging from one session to 2 days to help swell the numbers, and the manager had to fill in whenever numbers became odd. This meant that the lawns were full for most of the time. The only obvious drawback to this arrangement was that the manager, normally the most mild-mannered and likeable of men, became stressed to the point of extreme grumpiness, not to say downright rudeness, when having to play as well as manage. He should have been prepared for his games to be interrupted, of course: it is a well-known fact that no croquet player is capable of following the simplest written instruction, and that most consider the straightforward entry of a result on to a piece of paper a challenge for the most creative and undecipherable way of doing so; if so prepared, he would not have been disappointed. He is nevertheless grateful to all of the players for following his (verbal) instructions regarding bisque markers: he would probably not have made it through the weekend if any had been replaced in the box upside-down.

Jonathan Hills (one of the part-timers) played a remarkable shot on the Saturday afternoon: hampered after running 2-back he felt constrained to play the next shot lying flat on his back (feet pointing towards 3-back) with the mallet held somewhere over his left shoulder. Quite why he did this is not entirely clear: something to do with being the only way he could see the point of contact between mallet and ball. Earlier in the day Neil Chalmers had been using his mallet as a back-scratcher (not during the striking period, I hasten to add). Both incidents had spectators scrambling for cameras and camera-phones but unfortunately no-one was quick enough to record either incident for posterity. On the Sunday Georgeen Hemming achieved a remarkable double, winning both her games on a "Golden Hoop".
Greatest number of games was played by George Woolhouse, playing no fewer than 10 over the three days.

So much for the highlights, now the results. Winner was Gerry Varndell, winning 5 games out of 6, second was Nick Steiner winning 6 out of 8 and third Georgeen Hemming winning 4 out of 6