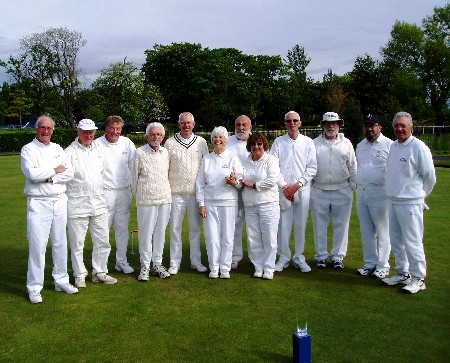 This year's event at Albert Park was held on May 9/10th. A third lawn was used, enabling an entry of twelve players from several clubs in the region (Penrith, Belsay, Tyneside, Auckland and M'bro). As an innovation we decided to use an 18 point format (after H1, the second clip going on 3? B) with 2-hour time-limits; this worked well and people appreciated getting more games, with minimal waiting. Despite rain affecting the first day, everyone had at least six games overall and four players managed seven.

As an American block of 12 was involved and all-play-all was not possible in the time available, the manager (Geoff Taylor) selected rounds from a 12?-player 'round robin' scheme so that contestants played players from different clubs in the earlier rounds. Block positions were computed using Comparative Scoring (see Gaunt & Wheeler), in which every player's performance was compared directly with every other player. Only games played against 'opponents in common' were counted (the player with most wins scored 2 points and the other player zero; if the number of wins was equal and the players had played each other, 2 points were awarded to the winner of this game; otherwise each got a single point).