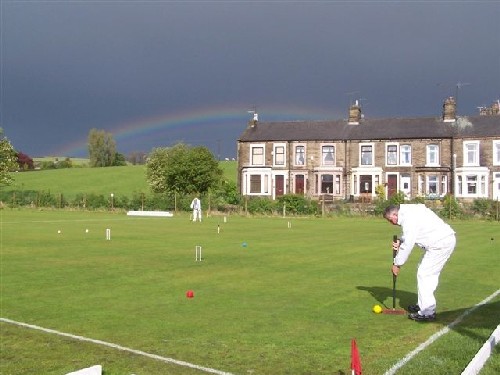 Somewhere Over The Rainbow

It was the men of Pendle against the ladies of Huddersfield, who fielded two of our ex-country members, Marjorie Eldon and Denise Hoyle in the first round of the this year's event.

In the morning Robin and Peter had a convincing win in the doubles, against Anna and Marjorie, Score +14. Andrew also won easily +15. In the other singles match David had only one ball to peg out but sent his opponents ball beyond hoop 2, only to find she had a lift and duly hit in from the south boundary, to peg out +1.

Lunch came at a very convenient time, as a very heavy shower left the lawns very wet. The showers continued on and off during the afternoon. The match concluded with the dark skies to the right and sunshine to the left and a lovely low rainbow as distraction. All the singles in the afternoon went Pendle's way, except for Andrew, who lost to a steady performance from Marjorie, although he ran several hoops on his last turn. Result +5T to Marjorie.