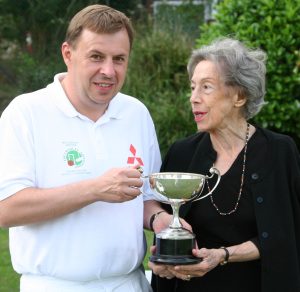 Robert Fulford beat Rutger Beijderwellen +2tp +26 +3qp in the final of the Championship of Surrey.

The lawns were playing at between 12 and 13 seconds (depending on lawn), and while the hoops weren't especially tight (I am assured that they were all set to 7/128"), they firm and consistent and that firmness caused many players problems.

Seeds 5 and 8 (Patel and Castell) lost out in the second round to Knapp -20 +4 +16 (who had won his first round match with a +12QP win over Noble in the third, with his first ever quad) and Butler +12 +6 (who had a first round +23 +9(t) win over Selman) respectively. Seed 7 (Hills) fought his way through against Town, but wasn't convincing enough to progress further. Seed 6, Farthing, continued his Lazarus act from the World Championship, by getting game, break and standard TP down in a best of three against Plummer, before recovering to win -26tp +9 +26tp.

The top two seeds were clearly out-playing everyone else, with Beijderwellen beating Stephens +24sxp +23sxp and Tibble +25tp +26tp, and Fulford symmetrically dealing with Mooney +24sxp +24sxp and Johnson +26sxp +26sxp, with all four games and SXPs completed before lunch on day 1. Robert then declined the opportunity for early plate games and the opportunity to break the record for the most ranking SXPs in a single day. Seeds 3 and 4 had comfortable wins, with Dawson beating Morrow +23 +25tp, and Death beating Polhill +20tp +26tp (the latter having had an 1130 late start and still finishing before lunch).

Three quarter finals went with seeds 2-0, with Chris Farthing causing a minor upset by beating James Death +17tp +9, however, none of this stopped the top two seeds who both cleared their way to the final with Fulford beating Dawson +4 +12tpo and Beijderwellen beating Farthing -8 +26tp +26tp.

The final was close fought, but some errors from Rutger proved too costly, with Robert running out the winner +2tp +26 +3qp

1.K supershot
2.Y corner II
3.U hits Y, runs angled hoop 1 to N boundary, buts hits Y. To 4b with three ducks
4.R misses from A-b by a lot; 1 yd out of II on N
5.K gets hampered after hoop 5 with 1-peel done, and misses
6.Y sticks in 3b trying to run under control for MSL
7.K DP, but fails to get position at rover during straight irish peel.
8.R QP