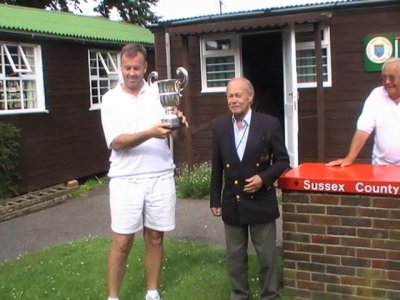 Reg Bamford won his fifth GC Open title in consecutive years with a straight sets victory over Stephen Mulliner yesterday at Southwick. Reg got through to the final without a single game lost. This event celebrated its tenth anniversary this year and with his win this year Reg now has a total of seven wins, only Stephen Mulliner, twice, and Ahmed Nasr share the honours with him.

Four blocks of six contested the championship with the top four in each block playing in a best of three knockout. The block results were:

The semi-finals were between Reg Bamford and Jacob Carr with Stephen Mulliner playing Samantha Thompson in the other half of the draw. Samantha gave Stephen a very hard fight and took him to three games. In the play-off for third place Jacob Carr beat Samantha Thompson. Jacob, not 18 until next month, will certainly be a name to watch in the future.

All players not making the knockout and the first-round losers played a consolation five-round Swiss. Bill Arliss was the eventual winner with four wins from five games and claimed the Hobbs Mallets champagne and the new consolation trophy.