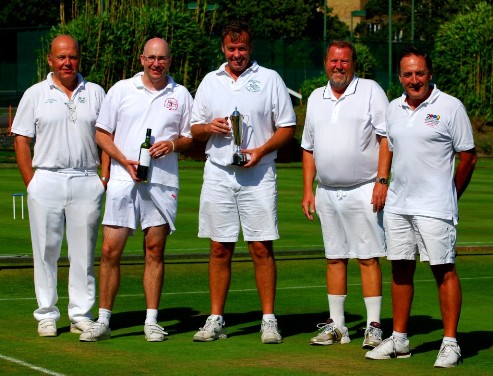 Playing for the first time in the Golf Croquet "Eights", Reg Bamford met all the expectations of his being a clear favourite. Far more uncertain was the format for the event. In previous years, the format has been an all-play-all block of matches that consist of best-of-three 13-point games. However, each year at least one of the matches has remained incomplete at the end of the weekend. This year, the manager Tim King decided to ease the potential for over-run by playing pairs of games (rather than best of three). As a consequence, all the players completed five rounds on the Saturday (that is, ten games in total) without dragging too far into the evening, leaving enough time (and convivial spirit) for everyone to retire to a very enjoyable social event.

King had announced an intention to hold at least a final after the block play and, despite the progress on the Saturday, the players expressed contentment with only playing this single round (rather than having semi-finals too).

At the end of play on Saturday, Bamford was clear ahead on ten wins, while King (7), Thompson (6), Hamilton (5), Morrow (5) and Sheen (4) were in the mix for the pleasure (!) of most likely meeting Reg in the final. Spiers (2) and Arliss (1) had less successful days, although on the Sunday, while battling a back problem, Spiers ended on a high, winning both games over Morrow in the final round.

The sixth round of play resulted in Sheen gaining ground (two wins against Arliss), while King and Morrow and Thompson and Hamilton shared the honours in their respective pairings. These results left Thompson and King in the strongest positions but the former having an easier task versus Arliss in the last round, while the latter was up against Bamford. Thompson did all that he needed to, demonstrating yet again that, however aggressive his opponent, he has more than enough tenacity to turn every game into a monumental battle (even when he had a seemingly one-sided loss of 2-7 to King, two of the other pairs had completed both of their games in the same period). However, although Bamford took an early lead in the first game, King found some of his best form and, with some big clearances and brave hoop running, he came back to take the lead at hoop 11. He took close position in front of 12 and, when Reg missed the long clearance, King faced his first ever winning hoop opportunity against the world number one player. The gathering audience had enough time to gasp as King twitched and hit the right-hand hoop leg full on. But then the ball spun to the side and dribbled through the hoop. Bamford had been unbeaten in his 2009 GC season, winning forty-eight games in succession! This one game was enough to earn King the right to play Bamford again in the best-of-three game final. They played out the remaining block game, where normal service resumed in terms of the eventual win to Bamford.

After more of the excellent East Dorset LTCC catering for lunch, the top four players went out to entertain a gathering of faithful local members. However, King had lost much of his morning sparkle and failed to counter the increasingly flawless Bamford, who won 7-3, 7-2. Meanwhile, Thompson carried on with his relentless determination and after falling behind early on, came back to win 10-8 in the single 19-point game for the 3rd/4th play-off against Sheen.

The hospitality and welcome at East Dorset LTCC was superb. Tom Weston had worked tirelessly to arrange a rota of keen and attentive scorers. The top players very much appreciate the interest of spectators who are keen to learn more about the game. When those spectators are willing to operate scoreboards then everyone gains benefit. The courts played with a good, even pace, speeding up as the breeze or sun dried away early morning dew.

Musk's of Newmarket continues to sponsor the event and the winner walked away with £125 in prize money.