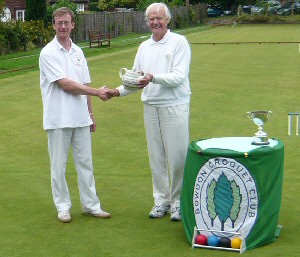 Ian Lines won the North of England Championship at Bowdon to win the Faulkner Cup, beating Rutger Beijderwellen +26tp, -26tp, +23tp, -24, +18tp in the final. It was Ian's first Regional Final, and the 4th time since 2005 that Rutger has been runner up at the Northerns. Rutger's first game win in the final brought Ian's run of 24 consecutive wins to an end.

The consolation plate was won by Ailsa Lines, who beat Chris Williams +21tp in the plate final, to win the Tollemache Plate.

Also of note was Steve Lewis's match win against Keith Aiton, James Hopgood getting to the semi-finals (beating Marcus Evans in the quarters), and David Walters almost beating Rutger Beijderwellen in the quarters.

Congratulations to the following for their handicap reductions:

Some photos can be found at www.bowdoncroquet.co.uk/

Details of the final - as far as I can remember...

(IL chose to go first)
1 IL to EB
2 RB 12.5 yard duffer
3 IL misses partner on EB leaving 'double' with gap of 1.5 balls
4 RB hits 'double' from S boundary (though probably aimed at a ball), goes to 1-back with not ideal ladies' leave (not quite in jaws at 1-back, and one of IL's balls only 2-yards off S boundary)
5 IL misses
6 RB does the first peel but is hampered after 1!
7 IL goes to 4-back with Diagonal Spread
8 RB misses long lift
9 IL finishes with delayed tp to win +18tp