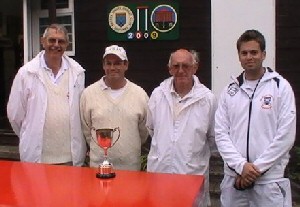 The twelfth GC Inter-County Championship was played at Southwick over the weekend. For the first time twelve counties participated and the event was played as an all play all format. Each match between two counties comprised two singles and one doubles. To prevent two strong players from sweeping the field, no player was allowed to play more than one doubles than singles or more than one singles than doubles. Because of a limit of ten lawns the eleven matches for each team were spread over 13 sessions with each team having two byes. The first seven rounds were played on Saturday but no clear winner emerged and any of about six counties could have won dependent on their Sunday play. The weatherman was extremely kind with brilliant sunshine all day.

Southwick's aim was to generate an end of the season party feeling and ran an Asian themed dinner in the club house on Saturday evening with about 50 people attending.

Sunday was again dry but rather cloudy and cold. A few surprising results were posted but Surrey held on with a run of five wins to become clear winners with nine wins in eleven games. The final results showed that no team really dominated the event as there were many 2-1 wins and all teams posted at least three wins. Because of the similarity in scoring of this event with that of the AC Inter Counties event, we were able to use the same scoreboard to keep all informed of the latest situation.

The overall results were

The teams at 5= could not be separated as each team had one win and one loss against each other in their mini block.