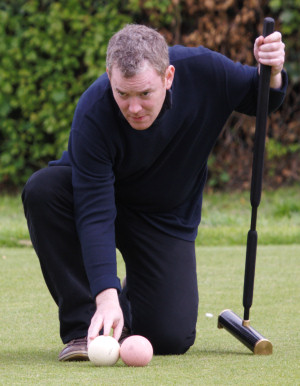 A smaller-than-usual band of players gathered on FA-cup weekend to contest the Nelson Morrow Tray in the annual Surbiton Speed Doubles tournament, played this year as a double-round robin of 26pt handicap doubles (that's 5 handicap doubles matches per day!).

Newcomers Sam Murray and Martin Siedel initially found the going tough, starting with five losses, but finding their form and an approach to the format on the second day, winning three from five in the second round. Regulars (having contested every time the event has been held) George Noble and Alice Williams started well, winning four from five in the first series, but faded on Sunday and didn't win another game.

That left Kevin Carter and Avril Rangoni-Machiavelli to surge into the lead, with some solid performances, including a rare (for this event) +26 win over Phil Eardley and Phil Eardley (who was partnering himself on day 2, after his original partner Gina Lewis had to withdraw).

Late entries Samir Patel and Colin Dalziel had to play catch up, drawing level before the final round, which was - as a result of some excellent clairvoyant management - scheduled against Kevin and Avril and in effect the final.

After some early sparring, Kevin took a break to 4-back, leading Samir to take on what may be the first ever Speed-Doubles TPO (in just under 10 minutes!). That left Colin and Avril to battle out the 3-ball ending, with Colin just making it to Rover when his time expired. Samir and Colin managed to engineer the final hoop while Avril was catching up, Avril got round before they could peg out - and with 90 seconds of her time remaining.