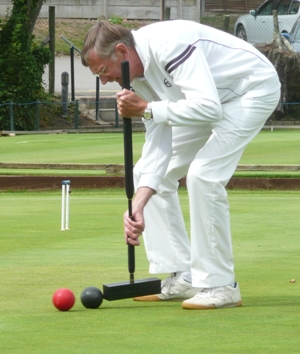 John Crisp won the East Dorset Midweek over 50s Handicap Tournament. Seventeen players gathered at Parkstone on what some claimed to be the only wet playing day in living memory. However, it was the East Dorset Over-50s' Handicap Tournament, so perhaps their medium-term memory was somewhat deficient. Overnight rain had left the lawns very wet, but playable, and everyone started their first game, with a 2.75 hr time limit imposed. As handicaps ranged from -1 to 18, long rows of bisques were very common, and only one game finished quickly, with "Top-Turn" Tom (Weston) rapidly pegging out one of Ann Peek's balls and then speeding round with his second ball. Ann had travelled from Nailsea for this privilege - other "visitors" were Ron Atkinson from Colchester, Richard Harris from Ryde and Richard Stevens from Hamptworth. In the afternoon the wind-driven rain was relentless and everyone stopped after their second game of the day, except for Tom who managed 3[1].

The next two days were dry, with some of the expected Poole sunshine, so everyone made the most of the well-prepared lawns and the excellent, good-value catering from the Club House Cafe. We also enjoyed the sight, sound and smell of another 50+ visitor during the afternoon, as the weekly summer steam train powered past the lawns on the return journey from Weymouth to Waterloo.

The format of the tournament was Egyptian, with the top four players after 2 days going into a knockout on day 3 for the Scott Trophy. The Egyptian would continue on day 3 for the other 13 players, competing for the Ashton Trophy.

There were four clear leaders after the second day, when everyone had played a further 3 games. One Scott Trophy semi-final saw Nigel Parkins win comfortably (+20) against Mike Glew. In the other semi-final, John Crisp (12) took his first ball to penultimate, having used 5 bisques. His opponent, David Nicholson (-1), took his first ball round to peg, peeling and pegging out John's forward ball. David then pegged out his own ball, leaving a one-ball contest, with John having 8 bisques standing. By the time both players were on 3-back, all the bisques had gone and the spectators were hanging on every shot. After David missed several long roquets by a whisker, John pegged out to win a place in the final by +4.

Both John and Nigel were under pressure in the final, so the mix of opportunities sought and errors made by both players contributed to a tightly-contested game. Eventually John Crisp triumphed by +5 on time.

The prizes were presented by Jill Lonsdale. An additional prize (of a bottle from the Parkstone cellars) was awarded to the best-performing visitor; it subsequently travelled to the Isle of Wight with Richard Harris. Another bottle went to the Manager, John Crowe, who was complemented on his relaxed but efficient approach to controlling the proceedings (and the players). Despite the first day's rain, a good time was had by all, and we look forward to an even larger turn-out next year.

[1] For those who wonder how only one person played 3 games, there were 17 entrants (including the Manager).