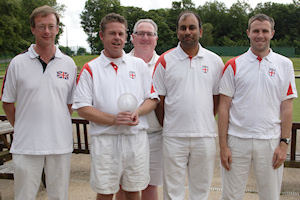 England completed a run of 11 consecutive victories at the 32nd Home Internationals between England, Ireland, Scotland and Wales, which took place 18-19 June at Heaton Park. Each player played a best-of-three against each of their equivalent players in the other teams.

Many thanks to Bury Croquet Club for kindly hosting the event at Heaton Park. Thank you particularly to Pat and her team of helpers for all the excellent catering, and to Barbara and Geoff Young for organising everything over the weekend, and to Paul Rigge for setting the hoops, and for providing the bacon butties.

Click here for further records about the Home Internationals