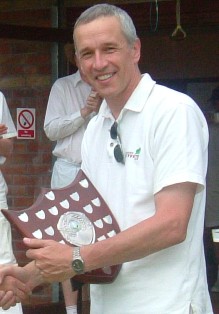 Paul Pristavec won the Nailsea B Level Weekend Tournament and retains the Margaret Fleming Shield for the 4th consecutive year.

There were 16 players from 10 different clubs playing in this event for handicaps from 2-8. The hoops were very firm and set to 1/16in for Advanced Play. After the recent hot dry weather, there were brown patches in various places on the lawns and some of the hoop approach areas were treacherous. So, these were difficult conditions and most games were unfinished after the 3 hour time limit. There were 4 Blocks of 4 with the winners of each Block proceeding to semi-finals to compete for the Margaret Fleming Shield. Geoff Hughes (Nailsea) came through on top of his Block having won two of his three matches and having beaten Andrew Wise (Bristol) who had also won two matches. His opponent in the semi-final was Chris Donovan (Budleigh Salterton) who squeaked in by virtue of a single net point lead over Pat Long (Nailsea). Pat Long had been very unlucky to lose a Golden Hoop point in her match against Neil Kellett (Cheltenham)
Tim Jolliff (Taunton), playing in his first CA Tournament, won all his matches to claim a semi-final place. In the fourth Block stood the defending champion, Paul Pristavec from Dyffryn. Paul had the lowest handicap in the field and was clear favourite. The standard of his play stood out as he showed that he could stylishly control the balls on the fiendish patches and run close hoops from awkward angles when necessary. In the cool of Saturday evening, with conditions much more benign, he suffered a -4 defeat by the manager who was standing in to make up the numbers and who snatched 19 index points from him! Paul still won his Block because he had beaten Jonathan Wolfe (Taunton) who was the other player in the Block on two wins.
Chris Donovan built up a good lead in his semi-final against Geoff Hughes as Geoff struggled to cope with the unstable area in front of Hoop 1. However, Geoff rallied and the eventual score was only +6T to Chris. In the other semi-final, Paul Pristavec had a more substantial victory of +18 over Tim Jolliff.
In the Final, Paul again showed his class and had an easy victory of +21 to take the Shield for the 4th successive year. It will no doubt be his swansong in this event as his handicap is now 1.5.
The runners up from the Blocks competed in a knockout consolation event. Here, Andrew Wise beat Pat Long (Nailsea) and Jonathan Wolfe (Taunton) beat Brian Shorney (Kington Langley). In a close final, Andrew Wise then beat Jonathan Wolfe +3T.
Ryan Cabble (Nailsea) was, as ever, interesting to watch. No spectators or out-players could feel safe from the outcomes of his hard-hitting. His tactics, always agressive, didn't get him enough wins in the Blocks but his ability to jump through hoops when the angles seemed impossible, combined with his hitting-in skills earned him success in the later play-offs.
Richard Way (Bear of Rodborough) won the play-off in those placed 4th in the Blocks by beating Peter Dyke (Nailsea) +1T