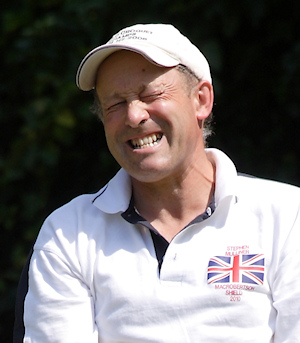 The opening matches are:

I've been out for a practice, and the rain has made the lawns really quite easy. About 11 seconds, with little excuse for break-play errors.

It's started raining quite hard, in fact play on lawn 3 appears to have been briefly suspended.

The rain broke briefly, during which Rob nipped off a quick TP to win the doubles quarter final on lawn 2. It's now raining again.

He's gone to 4-back in two breaks, and is now on a delayed TP

I've stopped play due to puddles, Reg was late so their's hasn't started.

The rain has now stopped and it's begun to brighten up a bit.

Lawn 3 - Ben has hit and gone to 4-back against me; I've missed the long lift against a spread.

Lawn 4 - Hamish had the first break, but it seems to have been James ever since.

If anyone is still reading, you may want to look at the other news items where I've updated the current scores. Since the last update, I've had lunch, four breaks and a pint! :)

Thanks for the notes of encouragement. The error on the singles draw has been fixed. Paddy beat Stephen -26tp +14otp +18tp in what seemed to be a crowd-pleaser.

Headline news is that Reg Bamford has lost the first against James Hopgood. I'll find out more in due course.

Paddy has won his first against Keith, but Keith is having the first break in the second.

Bulloch/Maugham is still in the first game. Bulloch is 2 and 4-back with the innings, after Dave got cross wired from a ball on a TP (and is now for 6 and penult).

Rutger looks to be in a break to win.

Andrew Johnston is just winning the first against Robin Brown.

Reg hit, and picked up his break. He got hampered after hoop 1, but hit.

Reg went to 1-back, and James has missed. Reg sextuple attempt.

The US flag has been extracted from the flagpole. It was hoisted with enthusiasm on July 4th and got stuck in the mechanism. The Union Jack is back, alongside flags of the club, CA and EU.

Aiton v Chapman update from a recent referee: Game all. Keith is 2 and 4-back. Chapman is 1 and break, currently for 4. Keith couldn't get a ball to 2 after a poor rush picking up his break off the spread, and didn't roll-up well enough.

Maugham is on a TPO in the second.

Reg is approaching 1 back with 3 peels done

Dave has jawsed the third peel of his TPO en-route to 3-back.

Reg has peeled penut before 4-back

Reg is approaching rover with one peel to go

Reg is still on the lawn; can't see any issues though

Reg has been joined by a referee. Looks to just have a 2 foot take-off to get a rush to the peg

Unclear what the fuss was about. Reg has pegged out. 2-1.

Turn 1 Robin shoots to East boundary, but fails to reach (ends up in the yard area). Robin then goes to check the laws, and returns to the lawn, and apparently tells Andrew that he gets to choose where to put the ball.

Andrew elects 2 feet out of corner 1, takes his rush to hoop 1 and goes to 1-back.

Correct ruling should have been that Andrew has the choice of leaving Robin's ball where it ended (yarded in), or having it placed on a spot on the yard line of Robin's choosing.