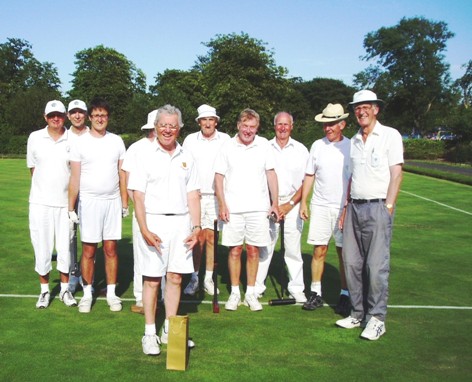 Over a wonderfully sunny weekend, we welcomed four visitors from distant parts, alongside players from Tyneside, Belsay Hall and Middlesbrough in our region. The three lawns were in excellent condition and the 2.5 hour time limit was rarely exceeded.

The competition was played in the two blocks of six below. In addition to the five 'internal' rounds, there was an extra round (played first on the Sunday) pairing players from each block sorted by their (Hands Egyptian) rating changes after the first three rounds. Andrew Killick (in his first advanced event) substituted for David Turner on two occasions and once for Jonathan Toye. The final position in Block B was decided on who-beat-who and went to David Turner over Dennis Scarr. Derek Watts, with 4 wins, was clear winner of Block A.