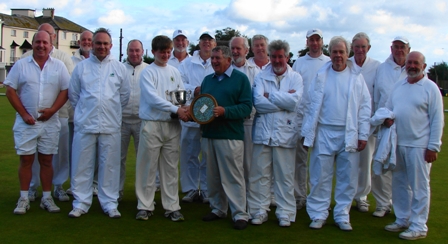 The finals of The All England Handicap, played at the Sidmouth Croquet Club on the weekend of the 17th and 18th September, were won in impressive fashion by fourteen year-old Adam Swinton from Bowdon.

On Saturday sixteen competitors from four Area Finals, with handicaps ranging from scratch to 20, played in 4 blocks of All Play All, Full Bisque Play to Base 10. A combination of very good lawns and positive play resulted in most games finishing within the 3 hour time limit. Three of the blocks had outright winners: Andy Brandwood (20), Bury; Jamie Angus (7), Sussex County; and Adam Swinton (14), Bowdon. The remaining block was won by Alan Clark (11) from Watford as a result of his narrow win over Dyffryn's Peter Balchin (12).

In addition to the semi-finals and final on Sunday all players played to determine placings. In the semi-finals Andy Brandwood beat Alan Clark +4 and Adam Swinton beat Jamie Angus +18. The final was a repeat of the North West Area Final between Adam and Andy. After a close early battle, the very talented and well-coached teenager's greater experience came through and he won + 11 on time. But considering Andy had only been playing a few months and had played just a handful of competitive games before this event, his play throughout the weekend was most impressive. Without doubt, both finalists showed a great deal of promise and should enjoy much future success.