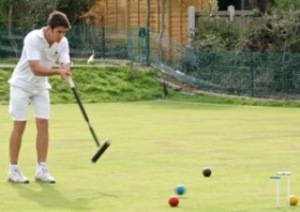 Will Gee in action in the Ascot Cup 2011 (Photo: John Spiers)

This year's gathering for the Ascot Cup was notable in terms of the quality of the field (7/16 had played in this year's World Championship, 6 of them reaching the knockout stage) and the range of ages. Rarely if ever in the over 100+ year history of the Ascot can there have been a situation in which the combined ages of the players on one lawn exceeded 270 years while on an adjacent lawn they were less than 80. I should point out that play was double banked.

In Block A the results were largely in line with rankings and by the end of Saturday, when 6/7 games had been played Robert Fulford and Howard Cheyne had qualified. Robert had only lost to James Goodbun, the holder, but the latter was out of the reckoning. In Block B the position remained more open with Jack Wicks, Stephen Mulliner and Will in contention. Wixy had been very impressive, except in one game when Gee submitted him to a 10-0 thrashing.

On Sunday Wicks won his final game to guarantee a semi-final place with the other depending on the result of Mulliner vs. Gee. Stephen had arrived early to practise while Gee was the last to arrive. He is a known slow starter so his supporters feared the worst but he confidently despatched Mulliner to the hitherto unknown surroundings of the Plate.

One semi-final pitted the two local lads, Fulford & Wicks. Jack took a 3-1 lead in each game before Rob found his rhythm and won through. In the other match Howard & Will had already competed against each other 14 times this year, with the score 9-5 in Howard's favour. When he took a 3-0 lead in the first it looked like business as usual but Will showed great composure to come back and win in two.

So the final pitched the pre-event favourite Fulford against one of the new kids on the block. Will showed confidence by running hoop one from the boundary and also taking hoop 2 before Rob levelled it ahead of what proved to be a pivotal hoop five. The first three balls were played for position but Will failed to block Rob's clearance shot which he executed to perfection, leaving his Yellow between peg and 6 while Will was left with a 17 yard clearance. He hit it centre ball and then after Rob missed he coolly ran from 7 yards to within a yard of 6. Although Rob brought it back to 5-5, Will took 11 and the game ended at 7-6 to him.

In the next game he also ran 1 from the boundary, showing superb confidence. It was 2-2 when they headed down the middle, then 4-2 to Will. At 7 he had the chance to finish it off. With a ball in the jaws he had a relatively simple (for him) clearance of 7 yards to go to 5-2 and probably 6-2. He missed and Rob made the jump and soon after it was 5-5. However, Will again stood firm under severe pressure and wrapped it up at 7-5.

A year ago Will Gee had yet to win a major tournament. Doubts were aired as to whether he had that deep desire to win to go with his obvious natural ability. This year, after three tournament wins, and a good World Championship we know those fears were groundless. Congratulations to a popular winner. For those of us who like to see evidence of the longevity of croquet abilities, the performance of William Ormerod should be mentioned. William's unconventional style brought him 4/7 in the block and he was within a whisker of qualifying for the semi-finals.

The lawns at Colchester played extremely well and the hospitality was excellent.