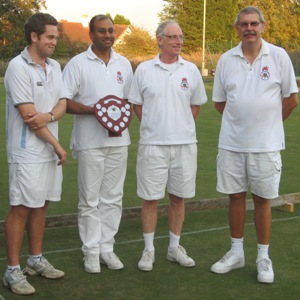 Surbiton beat Ashby 4-3 in a very closely fought contest to win the GC Interclub Trophy for the 5th time.

Surbiton were only one hoop away from a 5-2 victory. But Ashby were only one hoop away from a 4-3 victory and two away from 5-2! Ashby also won 16 more hoops than Surbiton across the 17 games in the match. However, Surbiton team captain Don Beck brought home the victory in a tight finish against Rachel Rowe, after John Spiers had hung on for a vital win in the morning against Ray Mounfield (from 1-4 down in third game) and Samir Patel had been assured in defeating both Ray and Tim King.

Letchworth proved to be a perfect venue for the final. The club was hospitable, members formed a decent-sized crowd of spectators, operated scoreboards and (most important of all) the two courts were in fantastic condition, with a fast, true surface that was a fair test of croquet ability. Other clubs should note Letchworth as a possible neutral venue when they are in need.