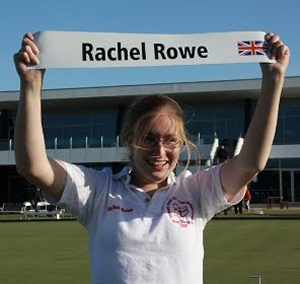 Rachel is a member at Ashby (where she first learnt to play croquet), Kenilworth (having been a student at Warwick University) and Nottingham. All three clubs can be hugely proud of the progress she has made since starting croquet when she was doing her Duke of Edinburgh Award.

Rachel won her block (6 matches out of 6), took the fifth seed position in the main knockout of the Championship and went into the final with a strong record of having won 21, lost 2 during the block and knockout phases. Jenny was seventh seed and had won 20, lost 4. Rachel started the final with a strong 7-3 first game after some tight early play. After six consecutive hoops, she was then 4-0 up in the second game. But Jenny came back strongly and, with a five-foot jump shot at the 13th hoop, inflicted a 7-6 defeat on Rachel for the first time at the Championship (Rachel had previously won all six of her games that went to hoop 13). At this point, the match had already passed the two and a quarter hour mark.

The match continued to see-saw, Jenny then Rachel gaining advantages in the third game. But Jenny made the break by taking hoops 10 to 12 to win 7-5 and achieve a 2-1 lead in games. Yet more tight play followed and this time Rachel was the victor at the 13th hoop to take the match into a deciding fifth game in front of 170 people.

A crucial moment for the match arose at hoop 4 in the decider. Rachel had to play a jump shot, with the danger of peeling Jenny's ball to lose the point and concede first approach to the next hoop. However, Rachel held her nerve to stay in touch at 2-2. She battled on to take the lead and then get a long hoop 8 to move 5-3 ahead. A final jump shot at hoop 11 saw her become World Champion after a match of almost five and a half hours. Both finalists had shown great stamina and determination, combined with no little skill.

Rachel is only the fourth different individual to be an English World Champion and the first at anything other than Association Croquet.

During the 2011 home season, Rachel had climbed to being top English female player in the rankings and won the Women's Golf Croquet Championship at Ripon Spa. She has also been a lynch pin the Ashby Croquet Club team in the Golf Croquet Inter-Club Championship over the past three years, this season forming a formidable doubles partnership with Will Gee at the top of the team. This partnership took them to victory in the English National Golf Croquet Doubles Championship at Wrest Park in September.