Bringing Croquet to the Parks 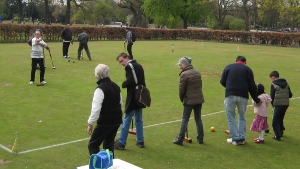 Like most Clubs - not just Croquet Clubs - Edgbaston is permanently on the look out for additional income and for new Members. Our efforts at Open Days, plus trying all sorts of advertising, PR, leaflet drops and the like, have proved truly abysmal. Our record, over the last 5 years, has been to attract an average of one - yes one - person to each initiative. The conversion to Membership ratio has been zero.

We look enviously at the success of our friends at Cheltenham, whose Open Days bring in the crowds, and result in a very high conversion ratio into CCC Membership. At Edgbaston, we are good at Marketing, and hosting, "Corporate" evenings - mainly for the professional firms in Birmingham City Centre. This programme adds about 50% on to our Membership income. Happily, the evenings are popular with our Members too, who enjoy helping beginners and the general atmosphere of a "jolly". But zero conversions to Membership.

2012 has placed extra and unexpected pressure on Edgbaston's finances: a three fold rent increase; over-budget lawn spend to address issues caused by drought; and yet another equipment break-in and theft. Looking for a novel opportunity, the Club has teamed up with Birmingham City Council, to bring Croquet to the Parks, on "never-used" Bowling Greens. The first "trial" Open Day was last Sunday in Birmingham's premier Park: Cannon Hill Park. The second event will be at the same venue, from 14.00h to 17.00h, on Saturday 21st April, when we need more Croquet helpers, please.

Rather typical of the Club's historic experience, all the Press Releases and pre-advertising failed to bring a single person to the Lawn. Club Members took on the role, so irritatingly performed outside holiday restaurants, of calling all passers-by to "give Croquet a try". Result: lawn 100% full of Croquet virgins for all three hours. We have captured a dozen or so "interesteds" and plan to follow up with invitations to further "tasters" at the Club. Watch this space. The CA leaflets were very helpful, but the primary positive was footfall. Cannon Hill Park is busy and we attracted our share.

The three objectives were:

Saturday will tell us more and then full de-briefings will let us see what we have achieved, and where we go forward.