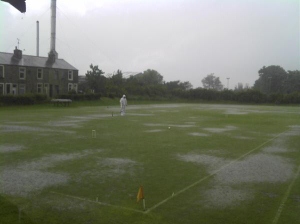 When play started it had been raining for 24 hours but we found four lawns were open. As the day progressed various showers passed over and we went down to three. The result of the changeable weather was a very slow flooding culminating in a six o clock monsoon downpour totally wiping out the club, Earby and most of Yorkshire. And darkness. Nevertheless much progress was made in the seeded knockout and many Egyptian games were played. Everyone seemed to welcome the challenge, it was not cold.