Paddy Chapman won the Championship of The East Midlands 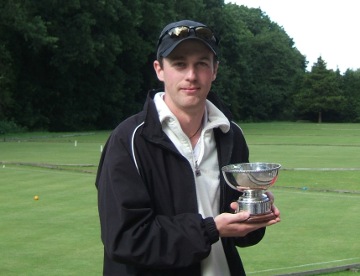 Having had a surplus of water on the lawns yesterday during storms yesterday, the supply to he pavilion has been cut off this morning. Severn Trent acknowledge the problem on their website and say they hope to fix it within 6 hours, but don't say from when!

James Hopgood was unable to travel from Scotland yesterday as the trains were cut-off, but is taking a pretty route via the West Coast this morning. The easy conditions resulted in a sextuple and two triples in the first three games to finish, but some of the morning ones are still going ... it was the top half of the draw that got behind.

Thanks to Dave Kibble for providing the template for the draws.

Severn Trent still haven't reparied the burst main. I'm about to check all the taps are off before heading off to the Victoria!

Water restored (which explains the huge queue on the Boulevard yesterday afternoon while they closed two lanes to repair the main), but the beer has run out! Just the odd hailstone this morning in an otherwise bright morning after early rain.

I got lucky with the results in two ways: I was able to schedule the semi-final of the process that I had inexplicably overlooked yesterday and have ended up with four different finalists, so plan two simultaneous single game finals followed by a best of three play-off ... and with luck some chaps might get home for the football.

A fine rainbow as Hopgood grinds out his fourth win of the day at 20:55.

A bright start, but the cloud soon came in and the wind persists.

Robin Brown won the Process, beating Ian Lines +5 tp. That was Ian's 9th game, all of which ended with triple peels.

The Draw final, played super-advanced by agreement between the players, is currently in a pegged out ending, Paddy having tpo'd James. James has just hit Paddy's ball in hoop 4 and got a good rush on the other one to his hoop, 2. However, he broke down at 4 and Paddy Finished.

Robin went one up in the play-off, which was played super-advanced by agreement between the players. A few showers blew over and the event finally ended in sunshine, Paddy taking the final two games to win -25tp +12tpo +15tp. The manager claimed to have won the plate, having disqualified all the good players for reaching the finals!