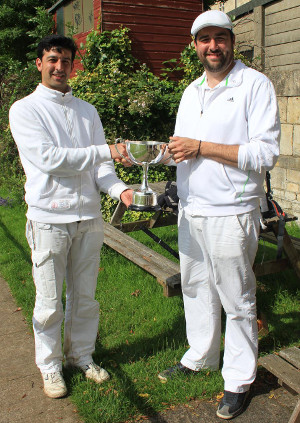 In spite of the atrocious weather that had been preceding this event for several days and which had caused chaos in the nearby Nailsea tournament the week before, this Swiss handicap singles tournament duly went ahead as planned over the weekend of 7th/8th July. Whilst the lawns at Bath were fully expected to be waterlogged on the Saturday morning, it was a relief to players and management alike that play was able to start on time with the lawns heavy but playable.

The wide range of contestants' handicaps, 0 to 20, with the higher end of the range predominating, raised the question as to how to decide on a tournament protocol which would best suit all concerned, whilst at the same time trying to ensure that the games, or at least the majority, would end in a peg-out. Influenced by last year's experience (and not by the driving rain which persisted all day), the manager opted on Day 1 for three 22 point games, played from a base of 6, with a notional but not fixed time of 2.5 hours. On Day 2, when fortunately the sun came out for most of the day, two 26 point games took place, again from a base of 6, this time with a notional time of 3.5 hours. The whole purpose behind the flexible time allowance was to encourage players to start their games sooner rather than later, thereby aiming to achieve the ultimate peg-out within possibly 3 hours (on Day 1) or 4 hours (on Day 2). In any event, each round of games was due to finish at a pre-determined time on the clock (subject of course to the usual rules).

To the dismay of the manager and in spite of last year's experience, of the 11 games over the weekend played between competitors with handicaps above 6, only one finished with a peg-out. The 9 games involving one or other of the players with handicaps lower than 6, only two went to time, almost certainly due in both instances to the higher handicapped opponent being a particularly slow player.

The winner of the Millennium Trophy in 2010 and 2011, Sanaa Hallam, brought his brother, Omied, down from Nottingham to take part in the tournament for the first time. Stephen and Margaret Read had made the journey all the way up from Cornwall and Caroline Denny (Bear of Rodborough) successfully overcame travel problems from Stroud to arrive very close to the start time on

both days, to take part in her first CA tournament. Bath and Nailsea contributed the remaining players.

In the last game on Day 1, the Hallam brothers faced each other, with Omied victorious, giving him the only unbeaten record that far. Omied's success continued on Day 2, finishing the tournament unbeaten, with brother Sanaa losing only the one game the evening before. Whilst Omied had been noticeably swift in his execution in play, the plaudits for the longest time taken to run a "golden hoop" went to Stephen Read and Paul Francis who managed to take 26 minutes, between them, to score the deciding point, the honour of winning +1T eventually going to Stephen.

Sanaa, being the holder of the Millennium Trophy, was duly called upon to make the presentation to his brother, maybe reluctantly but certainly with a smile.