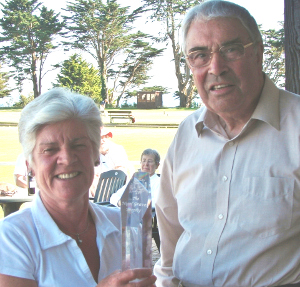 Dave Mundy won the Seniors' Championship Trevor Williams Cup for the third successive year, winning 7 out of 8 games. The tournament was well attended with 41 players taking part from as far afield as New Zealand, Nottingham and Colchester.

It was good to see so many players returning and also to see a few new faces. After the rain and saturated lawns of the last few weeks, the sun and summer decided to appear. Wet weather gear and the wellies were put away and the shorts and sunbloc appeared, as the week progressed so too did the temperature and the speed of the lawns.

The week started with the Handicap Doubles which saw Richard Griffiths( Cornwall) and Peter Miller ( Sidmouth) and Alan Cottle ( SussexCounty) and Avril Rangoni Machiavelli (Blewbury) emerge as block winners. In the Final on Sunday Richard and Peter narrowly beat Alan and Avril +1T.

The Open Handicap Singles started after lunch on Wednesday and within a short space of time all the bisques were re-located somewhere on the lawns. Everyone knocked out of the X was automatically entered into the Y.
The Final of the X for the Quiller Cup was between Peter Siddall (Roehampton) handicap 4 and Rosemary Bradshaw (Budleigh Salterton) handicap 16. Rosemary used all her bisques well and won +19.

The Class started after lunch on Thursday; this saw a number of results +26 but a large number of games ending +1T.
Dave Mundy retained the Seniors' Championship Trevor Williams Cup for the third successive year, winning 7 out of 8 games.

Peter Miller (Sidmouth ) won the handicap play block with 4 wins out of 5.
Saturday evening saw most players attend an excellent Tournament Dinner in the Clubhouse.
Quiller Barrett in presenting the trophies thanked everyone at Budleigh for all their efforts during the tournament and in particular complimented the groundsman Chris Root for the condition of the lawns.