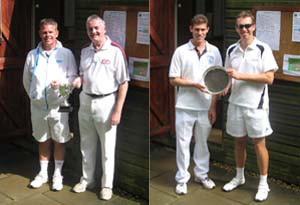 The final of this event is still be played: unfortunately a thunderstorm at about 2:30 flooded the lawns. Although it stopped and the sun came out again (and the club was having some success with a manual pump clearing water), it was obvious that the lawns would not be playable for a couple of hours, and there were obvious incoming clouds (which actually arrived and started raining heavily as the manager reached the car park), the decision was taken to abandon play. The Heatherington Salver (Plate) was shared by Richard Smith and Robert Wilkinson, and the final between Keith Aiton and David Maugham will be completed at a later mutually convenient date.