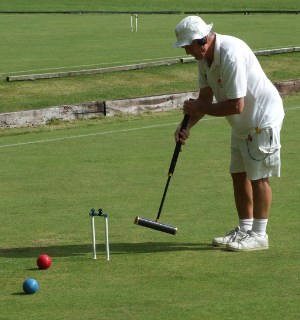 George Noble won every game he played and so won in the COWhorn advanced punning weekend - the eponymous Compton Open Weekend trophy is a brass post horn.

At lunch on Sunday, Nigel Polhill with 4 triples was in prime position for the peeling prize - the Ace Peeler helmet, a prize now resurrected as a policeman's (Peeler's) helmet with the Roy Wallis Ace Peeler cartoon as a badge (description not suitable for publication!). However, in his final two games, Dave Kibble completed a sextuple, followed by a TPO to take the prize.

The weather was amazingly sunny and dry for the whole weekend, despite heavy rain at another sporting competition taking place just up the road (the Olympics).

Manager Roger Wood made up the numbers in the first round by playing #1 seed Stephen Mulliner to avoid any lack of play, however he had a purple patch and completed one of his few triples in that game and continued winning right through to the final where his run came to an end and in doing so qualified for a CA Silver Medal.