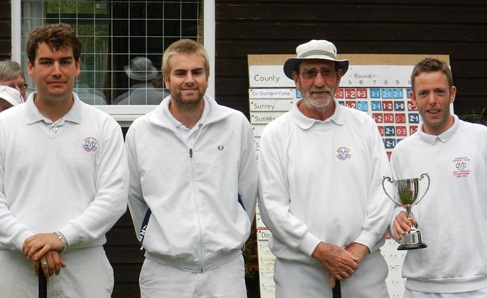 The fourteenth staging of the Golf Croquet Inter County Championship was held at Southwick over the weekend of 15/16 September. With excellent weather for the two days, the Kent team anchored by David Dray and James Goodbun showed their consistent strength with only a single waver when they lost 1-2 to Leicestershire in the sixth round. Following in the wake of Kent were Oxfordshire and Leicestershire, both keeping pace with one another and waiting for the second slip from Kent than never came. Eventually the two were only separated on net games with Oxfordshire taking second place.

Although we were seeing very confident play from the top three teams, it was certainly not very one sided throughout and we had to wait until round 5 before the first 3-0 victory was recorded. Overall only 14 of the 66 matches played over the weekend were posted as 3-0 results. Although some of the teams had the services of international players, it was pleasing to note that the Glos/Worcs had two players in their first tournament and still managed to avoid the "wooden spoon". Speaking to them afterwards about their experiences, I am sure we now have two new recruits to the regular tournament circuit.

When this event was moved from August to September, there were some reservations about the lateness in the calendar. However this period of the year appears to attract reasonable weather and the end of the season flavour adds to the overall success of the event. Also during the move, Southwick decided to start an end of the season dinner on the Saturday evening and this year we were treated to an excellent 'Spanish Evening' which was fully packed with players and club members.

This format for this tournament appears to be very popular with its mixture of singles and doubles play but it has to be said that entries are now at a maximum for the number of lawns that are available at one venue and if we want to consider the use of two venues like AC Inter Counties, then we will have to consider a major change in the format with possible increase in the number of days and number of venues. In the mean time if new counties emerge, then there are provisions in the general conditions for a playoff for places with the bottom teams from the previous year. The late staging of this event makes a play off for places later in the year quite feasible.

The full results are as follows. Where teams were equal on matches and net games, the who beats whom criteria was used to decide placing.