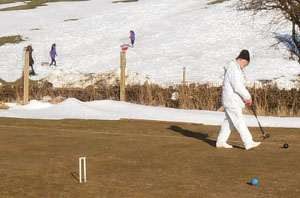 It's not very often that croquet shares a venue with winter activities but with children enjoying the Bank Holiday sledging on the slope at the back, we played croquet in the bright sunshine, the courts having been cleared of standing snow by hard shovelling the day before the players arrived.

The weather stayed as forecast, dry and bright but with a bitterly cold easterly wind blowing, only the in-players went outside to brave it. Easter Sunday being officially the coldest on record, with overnight temperatures sinking to -7C locally.

Entries, as always, ranged from Hcp -1 to 20, and every step in between, with most electing to play handicap only, or (introduced last year) advanced only and new this year, two players mixing it up and playing either discipline dependant upon whatever was available when they were.

Over the four days, various players floated into contention only to fall back into the pack the next day.