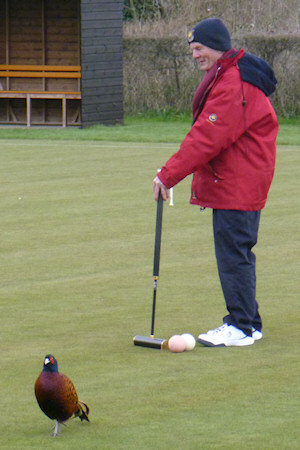 A quality field of 27 played in Arctic conditions. The going was 'easy' and the hoops set to 1/32nd.

Samir Patel set the pace and had notched up six wins from six games by lunchtime on the second day. Only Jamie Burch, on 4/5, had a chance of beating him and then only if Jamie managed to win a quick game to move onto 5/6 before he played Samir in the final round of the swiss. So, Jamie and Chris Farthing tore themselves away from the warmth of the bar and 30 minutes later they were back with news of a 26TP to .... Jamie.

In the final Samir had a chance of a third-turn break but blobbed hoop one from five feet. Jamie went to 4-back with a good leave, Samir missed the lift and Jamie completed with another TP - all very clinical. After a cup of tea, a slice of Sue Strong's superb carrot cake and a prize giving we all went home.

Howard Cheyne had an excellent tournament, finishing 3rd with 4/5, but has yet to announce he will give up GC.