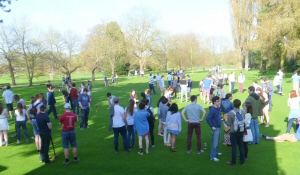 Every year Oxford University CC runs a CA sponsored inter-collegiate competition (Cuppers) and every year it attracts hundreds of teams. Last year we had a record 506 teams of four enter. This year we surpassed even that, and, with 521 teams of four entering, we have had to place 9 teams on a reserve list to keep the competition within the "manageable" limit of 512 teams! 512 is the realistic limit of what can be achieved in nine weeks, with one round of the knockout happening each week.

The competition is played almost entirely on College lawns with an unusual best-of-two, Level Association doubles format. Free coaching runs alongside Cuppers for the first four weeks at the OUCC lawns. Well over 100 people swamped our two lawns today to take part in the first of Ian Plummer's expert coaching sessions, happily sharing one mallet between three. The same lesson will be repeated on Thursday for those who could not make today, and we expect a comparable number of people to show up then as well.

Experienced members of OUCC know to avoid becoming the Cuppers Director at the end of season AGM, simply because organising Cuppers is such an enormous task. This year, the unenviable role went to Fred Woodcock, who has so far done an excellent job. His successes include the launch of a huge Facebook group by which he has publicised Croquet Cuppers: www.facebook.com/events/120823048100965/?fref=tck

To get a feel for the scale of the competition, I suggest you visit OUCC's Cuppers webpage, which displays the knockout draw: users.ox.ac.uk/~croquet/college/cuppersdraw.shtml