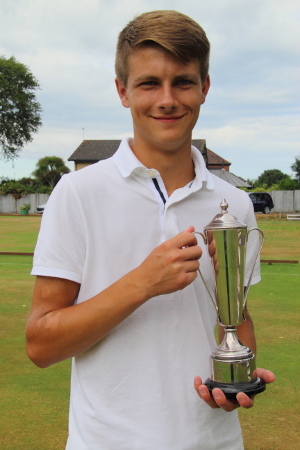 Croquet has gained a new bright young star. The modest and unassuming Harry Dodge won all five of his matches to take home the Musk's Cup. He lost three individual games but scored at least five points in each of those. He hits very straight with a relaxed swing.

The weekend started with some uncertainty because the manager had failed to identify a sixth player to replace a withdrawal. However, local player Robin Thornton stepped in to allow the planned all-play-all block to proceed. Robin is handicap 2, joining five other players all handicap 0. But he played with great determination, winning a game and enjoying himself along the way.

Defending champion Ryan Cabble was playing with hope of securing his fourth consecutive winning of the Musk's Cup. However, he started the weekend in less than top form, losing his first match, to William Ormerod in two straight games.

The random draw threw up a sequence of key matches. The last round on Saturday featured Ryan playing Harry. This match finished well after 19:00, suggesting the reduction from 8 to 6 players is preferable for the GC selection events. Harry won, putting a great deal of pressure on Ryan. And Harry was the only undefeated player after three rounds.

The two rounds on Sunday offered many possible results; even Ryan was mathematically still in contention. In the morning, he had to play Tim King first. Tim won, remaining on one loss. The other two victors were Tobi Savage (one loss) and Harry (still undefeated). Thus, three players entered the final round being a possible victor. Tobi and Ryan played at a brisk pace and completed three games before Harry and Tim had even finished two. Tobi secured the win that he required. Robin and William had decided not to play their match so they could watch the unfolding drama.

Meanwhile, Tim was not getting many big shots but he was never readily conceding hoops. However, Harry kept on with a calm, controlled approach, never being unduly harsh on himself when he made the occasional minor error. As a consequence, he won the first game 7-3 and then took a 5-3 lead in the second. Tim was unfortunate in conceding first approach to Hoop 9 by cutting Harry through Hoop 8 with a clearance he hit from the West boundary penalty spot! Harry took the 6-3 lead with the title all but won. Tim did not want to run Hoop 10 without some sort of advantage for Hoop 11, so put himself into the jaws several times. However, the inevitable happened and Harry eventually took control of the hoop. He had three relatively easy hoop chances and for the first time all weekend he showed some jitters and failed them all. After what one spectator reported as more than 30 minutes, Tim finally won the hoop (by this stage abandoning trying to be clever!) and Harry showed he was human with some slight tension in his play for the rest of the game. Tim took advantage of his one demonstrable superiority (greater experience than his opponent!) and held on to his chance in the match by winning the second game 7-6.

Perhaps if Tim had started strongly in Game 3 then life would have been different but Harry soon re-discovered his composure and gave Tim few chances to prevent a thoroughly deserved victory. Harry took the game 7-2.

Ryde club members provided wonderful hospitality and all the necessary facilities, also turning up to spectate.

The AC World Championship and previously agreed hosting arrangements for the GC Sixes led to the Musk's Cup and Kate Jones Memorial Trophy (second six) being on separate weekends at different clubs. Although the small group of players did have a relaxed and enjoyable time on this occasion, the Tournament Director will be recommending that the two events take place at on the same weekend at one four-court club in future years, easing issues around substituting players who drop out and having more players around to create more of a buzz.