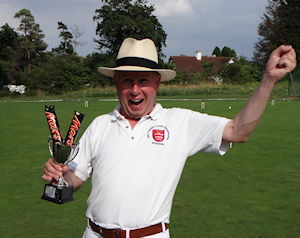 The tournament started with triples from Nigel Polhill and Christian Carter. Polhill then twentysixed Carter; the latter then devoted himself to failing sextuples.

Overnight the three players in contention were those whose surnames ended in double L: Polhill, Simon Hathrell and Bryan Harrall. The Manager then discovered that Bryan's name has just one L, so he was eliminated.

By Sunday lunchtime the sun had come out and the Manager was able to implement a best-of-2 final between Nigel and Simon (ie a best-of-3 counting their Saturday game). Nigel won an error-free game 17tp on the sixth turn.

This left the crowd able to concentrate on the most entertaining game of the weekend. Harral achieved clips of 1 and peg, which provoked Carter to peg him out. Some turns later the ball-count was further reduced when a cross-court roll careered into the peg. Carter declared himself not unhappy with this development as he had a three-point lead. But Harral kept in touch and somehow overtook. We find him a yard or so in front of rover, with Carter similarly in front of his hoop: penult. Harral fails rover tentatively, leaving himself not quite in the jaws and runnable. Carter's hoop-stroke is too good, going 4 or 5 yards beyond rover. He misses what little he can see of Harral's ball, bouncing off the hoop to concede an easy finish.

The last game saw Joel Taylor win the Tournament of Two Halves award: winless on Saturday, lossless on Sunday. He almost completed his first TP, and is One To Watch.