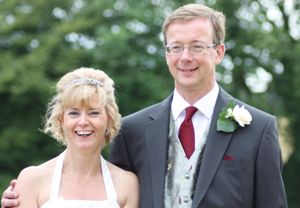 Debbie and Ian Lines at their Wedding (Photo: Elizabeth Williams)

by Elizabeth Larsson at Rushton Hall
1 September 2013 (Other News)

Two former Great Britain test croquet players, Debbie Cornelius and Ian Lines got married at Rushton Hall, Northants on 1 September. The wedding was attended by many of their croquet friends.

Debbie represented Great Britain in the 1996 MacRobertson Shield Test series and Ian in the 2010 series.