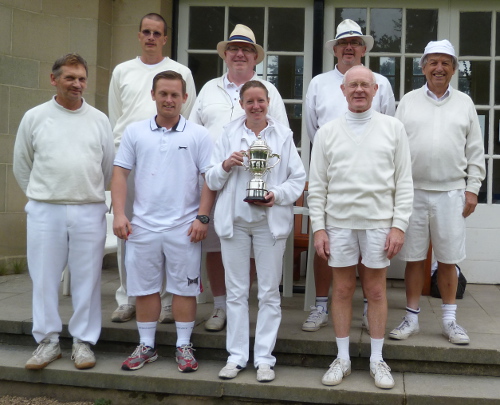 Beautifully prepared lawns, cut to 4.5mm each day for the three days leading up to the tournament and on alternate days throughout, should have been challenging conditions but heavy rain made it easy. In the first round, Gabrielle finished a TP with an excellent combination peg-out and went on with a winning spree of the first five games before dropping one to Martin Murray.
Day 2 was dryer and with some sun - all games remained interactive though :) Kibble and Murray had an amusing start when Murray missed the Duffer tice, hit the hoop and stayed there. Kibble, generally shooting badly, opted to aim at the wire in the middle of the 5 inch gap between the two balls and, of course, hit it full on. He rebounded and spun past the hoop, leaving three balls around hoop 6 with Murray wired from everything. He opted to shoot with the distant east boundary ball and hit for an easy break to 4-back.

Day 3 saw the end of the first series with the final game between leaders Higgins and Goat (Goacher) on 5 wins each. Gabrielle got to peg and 4-back but her spread peg ball fell into an old peg hole leaving it open on partner. Goat got the hole repaired and took the shot at partner some 7 yards away, which he nicked and made a leave from. Gabrielle cornered and Goat (on 1 and 1) went to peg and pegged her off. A long 3-ball game ensued; Gabrielle took several all-or-nothing shots, which Goat didn't capitalise upon fully, and eventually she hit one and finished.

After a poor start to the event, Kibble continued his winning run with more consistent play and notched up his second consecutive 6th turn delayed TP. However, a standard TP to go level with Gabrielle came to grief with three peels done when a poorly hit roll going to 4-back left a too-long roquet.

Having no wins in the first series, Rigge came out fighting in a long game against Goat. He reached Peg and was running rover with the second ball when he thought "I've won a game at last" and that lapse of concentration was enough - he stuck in rover. Goat hit the lift and they got pegged down so the round could continue.

Wixy failed to complete a TPO against Gabrielle, leaving her an easy finish and a growing lead.

Rigge and Berthouze played on into growing darkness but it eventually became impossible to continue and they were pegged down on peg and peg (R) vs. 4-back and 1-back (B).

Day 4: Early start for Rigge and Berthouze and after an hour they were pegged down again to enable the other games to start - meanwhile Goat, who had had a 40-minute head start, was last to finish. Rigge notched up his first win of the event against Panther (David Harrison-Wood) and with two games pegged down could have finished the day on 3. Goat resumed his pegged down game with Rigge (rover and peg), and spent 65 minutes taking a ball from 4 to peg with a B-spread, leaving partner on 4-back. Rigge missed an aggressive lift so we could enjoy a 30-minute or so ball from 4-back to win. With 30 minutes of daylight left, Rigge vs. Berthouze restarted (interleaved with Goat's turn). Rigge (peg and peg) just missed. Luc made 1-back (partner for 4-back) collected all the balls but had a long rush to 2-back and a poor approach. Rigge hit but managed to run into partner and rolled up to the peg, pegging one off. Luc had a shot from south of 1 and of course hit. Paul missed the peg to just out of corner 1. Luc took off and adjusted Paul's ball to wire it from the peg, making no attempt to get in front of 2-back. Luc and Paul then had a succession of misses and eventually Luc rushed to Paul just as Goat finished to draw level with Gabrielle.

Luc belted through 4-back but with no break. Paul had another shot at the peg, subsequently abandoning shooting from near corners in favour of going to the east boundary, making an opportunity for Luc who made 2-back but with no rush and so he took-off to move Paul. Now very dark, they were pegged down again (3rd time). Luc for penult and rover and on the North boundary with a rush to penult, Paul for Peg alone, near corner 1.

Day 5: At 9:30, the Rigge Berthouze game resumed, and one stroke later it was all over with Paul taking his second win. With two games to play, one of Gabrielle and Goat were set to win - each on 10 wins and Wicks on 7 - and they were scheduled to play each other in the last round. If in their penultimate game they got the same result, the game between them would decide the event or, if one loses and the other wins, the last game would create an opportunity for a play-off between them. The stage was set for an interesting, if potentially lengthy, final day's play.

Both Gabrielle and Goat won their morning games, so no play-off would be required and their final game became the final of the event. In the decider, Goat went East boundary, Gabrielle corner 2, Goat shot at the corner 2 ball, missing, Gabrielle shot and hit. There was a discussion about whether it was a cannon and Gabrielle decided not to take one. She took a ball to 4-back with a spread. Goat missed the long lift and Gabrielle finished with a tidy delayed TP.