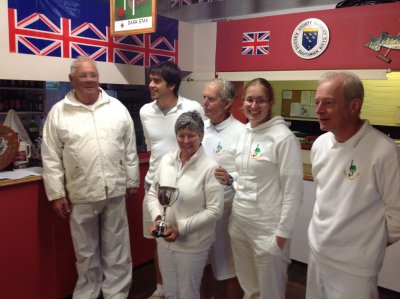 After several years of coming very near the top, Leicestershire finally managed first place over their main rivals, Kent, even without the assistance of Tim King who was delayed by a business trip. Only eleven teams played this year after Oxfordshire failed to raise a team but I think most agreed that it was one of the hardest fought competitions so far. There were very few easy games and when one saw the handicap list, one could understand why. The highest handicap playing was three and then only one player, the others being 16 on 0, 20 0n 1 and 15 on 2.

With a fairly well balanced competition, nobody raced ahead and in the first four rounds Kent managed to lose three matches but then went on to win all remaining games. Hampshire started well with three straight wins but only gained one further win on the second day. Leicestershire started steadily but managed two losses to Suffolk and Sussex in the early rounds.

The initial schedule was for all play all and this was completed in the first game after lunch on the Sunday when the teams were ranked in order. Happily for the Manager, it was a simple ranking on matches won and then games won with no need to resort to the who beats whom criteria. The teams were then paired in ranking order and each pair scheduled to play two more matches, where players were nit allowed to play both singles or both doubles. The tournament instruction gave the upper placing to the team with the most match wins. In the event of a tie in match wins, the first round meeting of the two team would be taken into account. However this arrangement did mean that if the team winning the first round of additional matches had also won their previous meeting, there was no need to play the second additional match which was the case for Leicestershire against Kent as Leicestershire won the first additional match and had already won the previous meeting.

After looking at weather forecasts just prior to the event, Manager Bill Arliss had been formulating plans B, C and D as the forecast for all the weekend was literally horrific. Fortunately the weather had been windy but dry up to the start of the additional rounds but it was at this point that the rain started to fall and gradually increased With the player rather cold and wet, two of the pairings mutually agreed,with the Manager's consent, to call it a tie when faced with one all after the first additional game. The sturdy types from Hampshire were willing to play but their opponents from Dorset were more cautious and conceded victory. The only pair that finished their final round was Glamorgan and Surrey. I suppose the Welsh are very used to the wet stuff as they managed to win their third game over Surrey and claim fifth place.