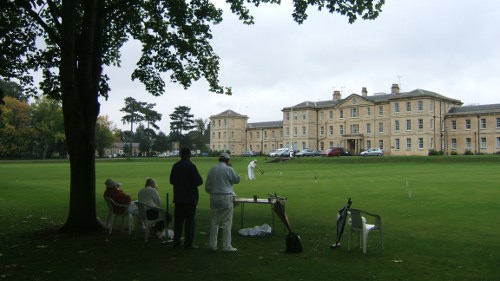 The Northampton club kindly hosted the final of the Murphy Shield on their lawns in front of St Andrew's hospital. They had a good surface, with firm hoops, and the pronounced slope down from the East to the West boundaries added an extra dimension to the game.

On paper, the two teams looked evenly matched, and so it proved. The two morning singles were shared, both finishing before the second game of the doubles had got under-way, the first having taken well over an hour with some closely contested hoops. The Nottingham pair eventually took the second as well. Lunch was taken on the hoof, in view of the forecast for heavy rain, which thankfully did not materialise.

John Bee beat Eileen Buxton comfortably to level the match, then John Smallbone beat Kath Wright 7-6 in the third to give Watford the lead. Ian Vincent looked to be going down to his more experienced (at GC at least) opponent Steve Dennis, but clawed back to take the second at the 13th hoop and won the third to level the match again. That left Geoff Johnson and Patricia Duke-Cox on the lawn, with the rest of us nervously watching. As with the senior Inter-Club event, it all went down to the 13th hoop of the final game. Patricia got into the jaws, but Geoff cleared her from behind the hoop, leaving the way clear for his other ball to score it.

Sadly, John Handy, who has been managing the inter-club events for the last few years, and had given the trophy, was unable to come, so the Nottingham Secretary switched to his CA role to present the Murphy Shield to the Watford captain.