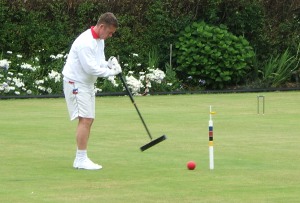 In the first of three tests, England play Australia, and New Zealand the USA. Team orders were announced as:

After four of the five days, and with 11 wins needed to clinch the 21-match test, England lead Australia 14-4, with just 3 doubles to play, and New Zealand lead USA 14-1, with 6 singles remaining. The fourth day started with England needing just one more win to clinch the test and Stephen Mulliner finished first to gain it. New Zealand achieved a winning lead in three days. On the final day, England won two of the three doubles to win the test 16-5 and New Zealand continued their dominance to beat the USA 20-1.

The second tests start at two venues in the North Island on Sunday 5th January. Arch rivals Australia and New Zealand play one test, while England takes on the USA.

In the final tests, Robert Fulford will play against his life-long friend and former doubles partner Chris Clarke following Chris' change of colours after migrating to marry a New Zealander and suffering several controversial incidents of non-selection for England despite being a highly ranked player. Chris has done a great deal on both sides of the world for the development of croquet and players in particular so we wish him well, except perhaps in that crucial final test :)

Commentary and scores are expected on the WCF's official site www.croquetscores.com/ and there's a local site that looks like it will carry Mac-related news sportsground.co.nz/macrob2014/102593/