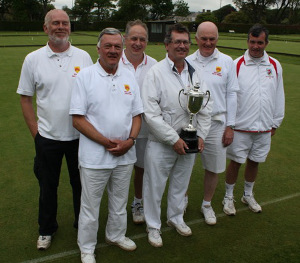 Glamorgan won the 100th Inter-County Championship with eight wins out of ten. Surrey came second with seven win. The Championship was undecided until the last set of matches, when Glamorgan beat Hertfordshire 3-0 to take the title.

Captain of Glamorgan, Chris Williams, said: "It was great to win the tournament having taken part in it for 20 years now." Glamorgan's highest placing was third in 2012.

Middlesex won Division 2 without losing a match. With their 10 wins, they only dropped two games which means that they have won with the highest number of game win, 28, in the history of the tournament.

Three teams from Division 1 were relegated to Division 2: Channel Islands, Lancashire and Yorkshire. The three teams winning promotion to Division 1 are Middlesex, Oxon/Berks and Sussex.

Wiltshire won the wooden spoon with no wins at the bottom of Division 2.

Wiltshire and Hampshire did not complete their final match as it did not affect promotion or relegation.

A score of NP indicates a game not completed