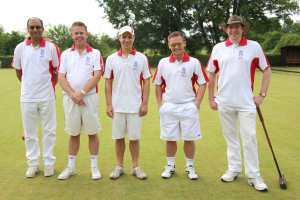 The tournament started after a slight delay while team orders were agreed. Jack Wicks [Eng] was a late substitution for England, replacing the injured Robert Wilkinson. Another late withdrawal Ireland found themselves unable to field a full team on the first day. Charlie Von Schmieder [Ire] was the late substitute, but he would be playing his first ranking game since 2007 and was only available on Sunday. To compound Ireland's woes, Evan Newell [Ire] suffered multiple car-hire related problems and arrived 2.5 hours late.

The lawns at Surbiton were in great condition, but suffered from overnight rain, supplemented by a further heavy shower during Saturday morning (which curiously was significantly heavier on laws 4-7 than on 1-3). This meant that the hoped-for lawn speed (measured at up to 12 Plummers on Friday) was cut down to a much easier 10 Plummers. The rain also meant that the hoops became much softer. This combined to make the afternoon much more of a shooting and peeling completion; something that suited the England team who ran out 5-0 winners over Scotland with triple peels in 11 of 12 games (the twelfth was a +1 result).

Ireland, still one player down won the first competed point quickly; a Simon Williams [Ire] +26tp +15 win over Ian Burridge [Wal]. But Wales won enough of the other matches to secure a 3-1 win in front of a large crowd who were enjoying Surbiton barbecue and the croquet in equal measure. The fifth match, between Garry McElwain [Wal] and Jane Morrison [Ire] was left at 1-1 overnight and never resumed.

The most unusual moment of the event occurred during this match when Ian Burridge [Wal] claimed relief from a hoop cross bar that was impeding his swing. This was denied and during appeal to the RoT appeared to try to claim that a significant proportion of the hoops in use worldwide were outside specification. After this was also turned down, he then resorted to cutting a piece of his mallet grip away in order to have an unimpeded swing. This dedication to the cause secured him a break, but he went on to lose the match. It subsequently became clear that this piece of grip was the part required to protect the mallet shaft from contact with the hoop during hoop strokes, prompting some emergency repairs to restore the grip.

The overnight scores left England very much in the driving seat, but the overnight pundits who spotted that 5-0 wins for Wales and Scotland could still leave England in third place were quickly scuppered by Pete Trimmer [Eng] dispatching Chris Williams [Wal] +26tp +25tp. Jamie Burch [Eng] put the Championship beyond doubt after a +7 +13 (super-advanced) win over Ian Burridge [Wal]. This meant that match-count would put England ahead, even if Wales won the remaining three matches. However, England showed no willingness to sit back on a tournament win, and won all three remaining, but closer, matches. David Maugham [Eng] beating David Walters [Wal] +1 -26 +26tp, Jack Wicks beating Garry McElwain +5tpo +14 and Samir Patel [Eng] beating John Evans [Wal] +26tp -26tp +7tpo.