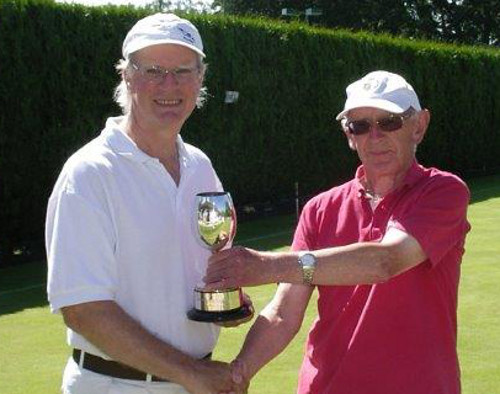 What a change to able to start and complete a two day tournament without interference from the weather! Twelve players with handicaps ranging from -1 to 4 took part in almost perfect conditions in an all-play-all format. At the end of the first day after six rounds nobody was unbeaten, but four players (Jeff Dawson, Lionel Tibble, Malcolm Bigg and Mike Town) had five wins.

Near the end of day two, with one round to complete, only two players could still win. Lionel (Northampton) had nine wins and Jeff (Woking) had eight. As luck would have it (or the manager would claim good planning!) they were due to play each other in the final round. Under the rules of the tournament, in the event of the wins being tied, the winner would be based on who beat whom. So Jeff could draw level on games but win overall if he beat Lionel. After hoop ten, Lionel was ahead 6 - 4 but Jeff got the next three hoops to win the game 7 - 6 and with it the tournament.

Deserving of special mention was Ann Brookes (Colchester) who, with a handicap of 2, won eight of her games including a win over the tournament winner, and finished third in the event.