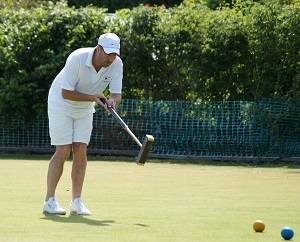 After a snowy start to last season contributing to very slow lawns in April, the decision was taken to move the event this year. This by chance plonked the Saturday of the tournament onto this year's Summer Solstice providing the perfect opportunity for lots of play into the evening and, being a flexible Swiss with fast players, it seemed plausible that somebody (well, realistically, maybe only the fantastically fluent Mark Avery) might set a record for most games played in a day.

Before the tournament started we knew of a few players who had played nine games in a day but no one could remember anyone having played ten.

Mark wasn't trying particularly hard to get through games and the manager wasn't particularly trying to press him on quickly either. At 5pm with 5 games finished we weren't expecting a record to come, but after a string of quick clinical wins and fuelled by a pizza delivery (ham and cheese) Mark started his 10th game of the day against Ailsa Lines at 9:10pm. Mark had a third turn ball round. Ailsa hit the lift and started a break which might have taken the match into the dark, but after a mistake at hoop 4, Mark was quickly able to finish in reasonably good light by 9:45pm. A quote from Mark at the finish, "Ooh my back!". Six of Mark's games were super advanced superadvanced super-advanced which tends to make them slower!

Elsewhere Jose Riva completed his first ever sextuple having been going for them since the start of the season. Jose looks like he could become a world class player if he wants to put that much time into the game. Jose followed his sextuple by being sextupled himself in back-to-back games against Rob Fulford and Dave Maugham and again the next day by Pete Trimmer. Newly resident in East Anglia, Kiwi Jarrod Coutts is improving and had great results here and possibly the luckiest triple, peeling 4b sending the ball up from 2b(!) and then doing a straight double against the luckless Debbie Lines.

Rob Fulford was the winner of the tournament winning all of his 11 games. Rob met Dave fairly early on in the game that turned out to be the decider. Rob completed 6 peels of a sextuple but missed a 7-yard return roquet after jumping through rover. Dave then broke down on his own sextuple attempt to let Rob finish. Dave finished on 6/7 completing 3 sextuples in the tournament.

Thanks to everyone who helped at Colchester particularly two people: Jonathan Hills for coming down and setting the hoops as he does for most tournaments (I'd say he was a fantastic club member to have, if it wasn't for the fact that he isn't a member at the moment!) and also to Susan Fulford who put lots of work into producing tasty home cooked food.