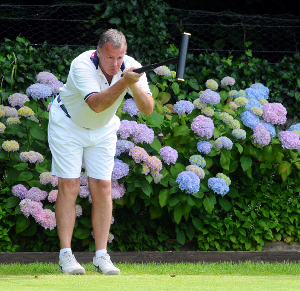 27 players arrived at Sussex County on Thursday morning for the first day of the new format 4-day singles event. The whole event was played with fabulous weather; not a drop of rain and lots of sunshine. The lawns at Southwick were the best I have ever seen them; we were treated to a mow every day and very firm hoops throughout the event.

We had the standard 4 blocks, single banked untimed best of three matches, although a late withdrawal meant one block had more time than the others to enjoy watching the croquet. There was plenty of time to fit all the matches in every day and several of Saturday's matches were moved forward to accommodate various sports fans!

There were some early block upsets; much to the crowds' enjoyment newcomer John Paul Moberly took his block match of Reg Bamford and earned himself a well deserved handicap chop from 2 to 0.
There was less drama in the other blocks - Stephen Mulliner had a clean run; not dropping a single game. Both the leaders in the other blocks had at least a few game losses inflicted upon them, but the normal suspects qualified for the knockout event starting Saturday afternoon. In block D we had the rare event of all match results conformed to the ranking favourite.

The plate event started immediately, with the willing participants split into 2 blocks and then another knockout event. The final of Ivor Brand v Andrew Hope were playing at the same time as the main event final so didn't get their fair share of the spectators; but took it right to the wire with Ivor winning 7-6 at hoop 13 in the third game.

As seeds 1 and 2 and top of their respective blocks, Reg and Stephen were drawn in separate halves of the knockout draw setting up for the likely scenario of a repeat of last years' final. Only 2 of the first round knock-out games went to 3 games, and these both eventually went the way of the favourite. Similarly, only 1 of the quarter finals went to 3; this was Pierre v Reg which started to attract a crowd on Saturday evening. After the entertainment had finished the stragglers enjoyed a fish and chip dinner at the club.

Meanwhile the majority of the eligible players started the Bowl and Super Bowl events with a best of 3 knockout format. David Wise from Australia beat Richard Brooks 7-4 7-2 to win the Bowl. Pierre Beaudry won the SuperBowl final against James Goodbun 7-3 7-4.

Sunday morning both semi-finals were treated to Stephen's hoop setting on the show lawns near the clubhouse. Both were wrapped up in 2 games to the top seeds; Stephen exacting his revenge on Rachel for knocking him out of the Europeans several weeks earlier and Reg beating Martin French.

After a leisurely lunch Stephen and Reg started the final. Stephen took the first game but Reg made an excellent come back at the beginning of the second - including a fabulous jump at hoop 3 punishing Stephen for only jawsing. Reg took the last 2 games, winning the British Open Championship for the first time since 2009. Stephen has won this event for the past 4 years, not quite beating Reg's record of 5 consecutive years with the title. Despite the event running since 2000 there are still only 3 names on the trophy.

Feedback from surveys distributed at the event seems to majorly favour the 4 days of singles and the experience from the event at Southwick suggests that there is the time with 10 lawns to single bank all of these games if and when we can achieve the entry of 32. There were a significant number of requests for a doubles event to be re-included so the GC Tournament Committee will investigate this for the 2015 event.